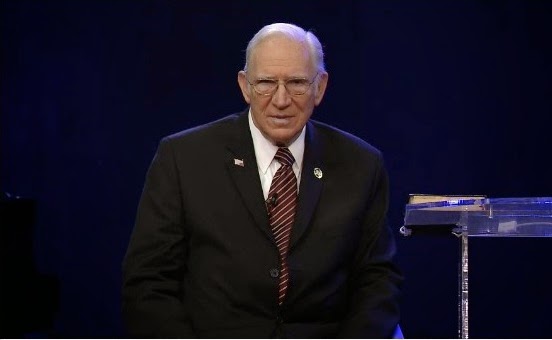 The Manifest Fruits of Falsehood

Many say one can’t judge whether another believer, particularly one presenting him or herself as a teacher of God, is of God. Poppycock! Of course they can be discerned – and must be. Should your spiritual welfare be entrusted to a liar? God forbid. Jesus said you WILL know them by their fruits.

So you don’t think Chuck Missler (www.khouse.org) is a false teacher, Colleen? Yet he teaches much false doctrine. His name is in lights and so is his ministry. Is that what you think the apostles and prophets did? Can you imagine John the Baptist starting an organization called “John the Baptist Ministries”? “Come and hear the powerfully anointed Voice in the Wilderness! You’ll have an unforgettable time! Bring your friends and neighbors! Be baptized in the River Jordan and God will meet you there! Take a souvenir back with you!”

“Dr.” Chuck Missler is a phony, Colleen, just like all the rest of the similar operations in Jesus Christ’s Name, and you are deceived by them. Why? Why are you in the dark about him? That’s the question!

For example, Missler teaches the false doctrine you inquired about – that of the nature of women’s participation in the congregation of God. Do women teach men or not? Do they hold positions of authority over men or not? Or were we mistaken in what you really believed? Perhaps we wrongly assumed you differed with Bilezikian because of these things, considering his book, Beyond Sex Roles?

Twice was Missler reported to be plagiarizing. What man of God copies another writer’s materials and puts his own name on them? Yes, he ‘fessed up, once and again, but are these innocent mistakes or deliberate offenses? Not hard to tell. Wouldn’t you know you were plagiarizing if you did something like that? The list of Missler’s falsehoods is long, and glaring are the fruits of his doings.

What is the precious fruit of the Truth of God? It is faith, obedience, freedom, understanding, health, and peace – it is the abundant life, even as Jesus says, and He is no liar. One may be financially poor, yet spiritually rich, like the widow with her two mites tossed into the treasury.

What is the fruit of a false teacher? It is destruction and death. What’s happening with Chuck’s wife Nancy and his son Mark? Are they not financially well off? But while they live, they both suffer and are dying of cancer. What does God say to His people about dreadful diseases?

The fruits of false teachers is ultimately death. They may teach truth, but they mix truth with error. Chuck Missler’s own family is victimized by his leadership and doctrine. How about everyone else who follows him?

“And He said, ‘If you will carefully listen to the voice of the LORD your God, and will do that which is right in His sight, and will give ear to His Commandments, and keep all His Laws, I will put none of these diseases upon you, which I have brought upon the Egyptians; for I am the LORD Who heals you’” (Exodus 15:26 MKJV).

“For the LORD God is a sun and shield; the LORD will give grace and glory; no good thing will He withhold from those who walk uprightly” (Psalms 84:11 MKJV).

Do we condemn them for their awful circumstances? NO! We would want to see them repent and be healed! But they condemn themselves with false piety, by taking the Lord’s Name in vain. What does the Lord say about that?

“You shall not take the Name of the LORD your God in vain. For the LORD will not hold him guiltless that takes His Name in vain” (Exodus 20:7 MKJV).

Read God Heals Today, His Way. You also need to read Diabolical Doctrines and The True Marks of a Cult.

Thanks for this – yes I do believe Bilizikian is false as you do for the reasons you do.
I certainly will look into the Missler issue – and yes I am aware of Nancy and Mark being ill.

It is very difficult to know who to follow – obviously I know that the Bible is the ultimate and only TRUE Word.

Even those who teach the truth then get known for this and so have a ‘ministry’ or teaching place to teach from so how does one know who is right and who is wrong?

Can I ask for some info on background of The Path of Truth – who how founded – what makes you/them different.

We understand your questions and don’t find them confrontational. Moreover, this is an excellent opportunity to shed light on the issue of false teachers for you and many others who have the same questions, whether friendly or antagonistic. We rejoice that all will hear the truth.

“It is very difficult to know who to follow – obviously I know that the Bible is the ultimate and only TRUE Word.”

“And when He puts forth His own sheep, He goes before them, and the sheep follow Him. For they know His voice. And they will not follow a stranger, but will flee from him, for they do not know the voice of strangers” (John 10:4-5 MKJV).

Knowing “the Bible is the ultimate and only TRUE Word” assures you of nothing. Unless you turn to the Lord and follow Him, you’re lost. Instead of edifying your spirit in the true love (faith and obedience) of God, knowledge of the Bible without these things will only puff you up.

Almost every teacher and preacher out there in “Christendom” claims that the Bible is the ultimate and true Word of God, yet look at the division and confusion coming from their midst. That’s because they’re without Christ. They’re not part of His mystical Body, the Church composed of all those who believe and follow Him outside the camp. The self-promoting preachers who set up a “ministry or teaching place,” as you call it, like Chuck Missler’s Koinonia House, appeal to the Bible as the Word of God, but give their own private interpretations. They attract followers of themselves, men entrenched in this world and hell. Like begets like. How could they ever lead you to the cross and eternal life?

The cross we preach, the same as the apostle Paul, is the antidote to the endless cycle of learning and never coming to the knowledge of the Truth, the Lord Jesus Christ. God’s ordained teachers lead one to the fullness of life in Him, no less:

There is no schism or unholy mixture in Jesus Christ.

The Lord, and not knowledge of the Bible, is the focus of any man of God’s ministry. Can you imagine the apostle Paul starting a ministry like “Dr.” Missler’s, “dedicated to the development and distribution of materials for encouraging and facilitating serious study of the Bible”? No, Paul determined to know and preach nothing other than Christ crucified among those who believed, which is the testimony of the Scriptures.

Victor gave you Diabolical Doctrines and The True Marks of a Cult, two writings that conclusively demonstrate that what the Word of God presents, and what Chuck and Nancy Missler teach and present, are two very different things. Have you carefully and prayerfully red these documents?

If you disagree with anything we’ve said there, please let us know. No one has disproved anything in either of these writings or in our false teacher postings. How can one prove the truth is in error?

“Can I ask for some info on background of The Path of Truth – who how founded – what makes you/them different.”

I believe this has been answered already, but to state it plainly and clearly – the Lord Jesus Christ founded His Church, as He told Peter, based on the revelation of Himself as the Son of the living God.

“And I also say to you that you are Peter, and on this rock I will build My church, and the gates of hell shall not prevail against it” (Matthew 16:18 MKJV).

How were we joined to His Church? Read Our Testimonies and wHaT tHe LoRd HaS dOnE wItH mE.

Colleen, you say that you “just want to learn and do the right thing as I try to lead others the right way into the kingdom of God.”

The Lord has brought you here in order to learn the right and good way, if you are willing.