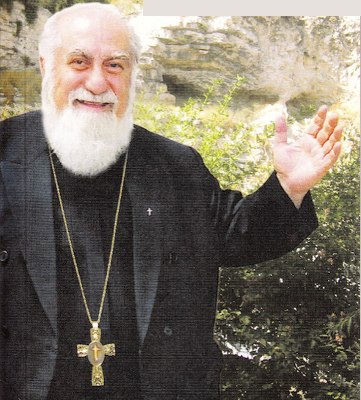 “Doctor” or “Reverend” Doctorian plays the part of an aged holy man, appearing in all black with a white beard and large cross hung around his neck. He exudes the universal appeal of a religious Santa Claus, an old and wise “saint” revered by all. But Jesus said that which is highly esteemed among men is an abomination to God, and there could be no more appropriate words for this pious fraud.

While examining the website of a former spiritual acquaintance of mine, Dave Loewen, we found that he had posted the record of a vision, The Five Angels, purportedly received by “Reverend” Samuel Doctorian in 1998. Of course, Dave Loewen posted this record because he honored it as of God. After reading it, we say it is nothing short of hogwash. In addition to this false vision, there are several other proofs or manifestations that Samuel Doctorian is a false prophet or false teacher.

One, he takes on the title of “Reverend.” There is only One Who is to be “Revered,” and that is God.

Two, we found that Doctorian was honored, interviewed, and praised by Benny Hinn, the criminal prince of scumbags, who deceives and robs millions by his lies and sorcery. If Doctorian were a true man of God, he would see through Benny Hinn and tell him his great sins; he would not honor his presence and person as of God.

Three, Doctorian adorns his body with religious accoutrements, including images (the cross), another sure sign of someone who is not in the Spirit, but in the flesh. To such, God reveals nothing. Indeed, his fruits tell that God has revealed nothing at all to him.

Four, the substance of his vision does not witness with us, and we disagree with several details of it.

Five, while phonies may honor the real, but only after the real have passed away (as the Pharisees garnished the tombs of the prophets, though their fathers had killed them), phonies will honor phonies while they are yet alive. Dave Loewen, a phony, honors a phony. If Doctorian were a man of God, Dave Loewen would not honor him, and Samuel Doctorian would not permit Dave Loewen to represent his spiritual essence, because Doctorian would know Loewen is not a man of God and does not have the ministry from God he claims to have. So here we have false teachers and false prophets honoring and praising one another, children of hell, deceiving, blaspheming, and causing others to blaspheme the Wonderful Name of the Lord Jesus Christ.

There are many other solid indicators manifesting these men as false teachers, not the least of them being their doctrines and religious affiliations (see Diabolical Doctrines and The True Marks of a Cult). For those who seek after God and truth, our warnings of these men can be more than sufficient beacons to steer spiritual pilgrims from treacherous and destructive shoals in the ocean of life.