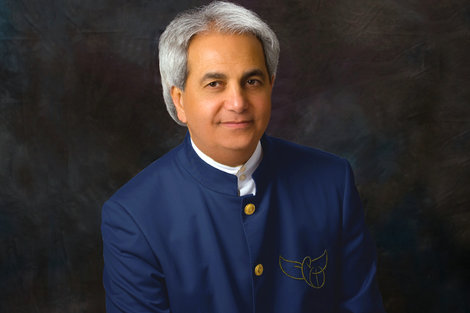 A Deliberate Liar and Scoundrel

Some false teachers are sincerely deluded. But Benny Hinn is the quintessential religious con man who knowingly enriches himself by taking advantage of ignorant and desperate people. He is an utter phony, a bloodsucking parasite whose time of exposure is now.

On September 17, 1999, Benny Hinn publicly cursed all who have cursed his ministry: http://www.youtube.com/watch?v=7wAQ5ftiEqE

I, Victor Hafichuk, go on record to say that therefore Benny Hinn has cursed me, because I most certainly curse him and his ministry and have called him a scumbag. May the Lord God of Heaven and earth perform that which only He can do to show all the earth whose curse stands. May Benny Hinn be exposed in the most obvious and dramatic of terms as the impudent liar and scoundrel he is. Lord Jesus, let that time not be delayed any longer!

We saw two interviews, one Hinn conducted and another with him as the subject. Here are Victor’s observations:

Going to Pot (see Benny Hinn: ‘I Would Not Do This for Money’):

Hinn was supposedly being interviewed here for the first time on a network TV news program. His attitude was, “Let it all hang out now. I can do as I please; and who cares? Who is going to stop me? It’s all rotten. I’m only doing like anybody else, and nobody knows the difference. You’re all a bunch of criminals and suckers. Besides, is it so wrong?”

Except for his last question, the rest is mostly true, as far as men are concerned. Everyone is doing his or her own thing. Everyone is looking out for themselves and to hell with the rest who don’t agree. In such a world, scammers like Hinn seemingly get away with larceny and murder. But while men allow such crimes to go unpunished, God does not. His Word stands, despite appearances to the contrary: “Do not be deceived, God is not mocked. For whatever a man sows, that he also will reap” (Galatians 6:7 MKJV).

Even now, Hinn’s feet are in slippery places as he trods in hell, with more trouble on the way:

“The righteous shall rejoice when he sees the vengeance; he shall wash his feet in the blood of the wicked. And man shall say, Truly, there is a reward for the righteous; truly, there is a God judging in the earth” (Psalms 58:10-11 MKJV).

Those who scorn God because shameless liars like Hinn appear to prosper for a time, beware. Do you think you will escape the judgment of God?

Read Shameless Scoundrels Defame Divine Healing for more details on the sin of Hinn and his companions.

The Bottom of the Barrel: A Motley Crew of Demonic Mockers

“But evil men and seducers will go forward to worse, deceiving and being deceived” (2 Timothy 3:13 MKJV). All manias end with a blow-off phase where all sense is abandoned, because people are given over to their lusts entirely. So we know that we are nearing the end of evil men and seducers when they laugh like devils and call that the worship of God.