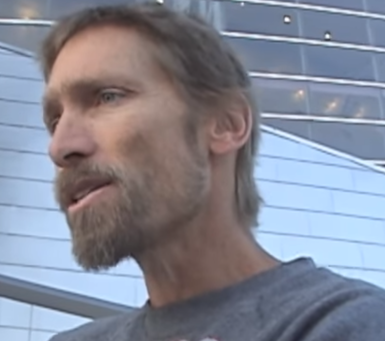 When a correspondent on his site asks about us, Darwin lists several things he finds wrong with our doctrine (having twisted the Word of God and misunderstood what we preach). His final issue is that we list him as a false teacher. How can we not, with all the evidence against him?

A Lem (Lemuel) contacted us on our chat line, asking for spiritual guidance, insisting he really wants to worship and serve the Lord fully. Paul and Sara spoke to him on chat, and Paul and I had a telephone conversation with him as well. Our basic advice to him was to decisively turn from any and all sin. We found him to be doubleminded and suspected him of being disingenuous.

After confessing some of his great and many sins to us, one of the things we told him was that it was presumptuous of him to use the email handle of “holyfire,” seeing there was not so much as a hint of holy fire there with him.

On September 11, 2009, he informed us that in obedience to our counsel, he had changed his address. On September 23, 2009, Sara discovered the entry included below on Darwin Fish’s blog. It was a letter from Lem on September 20, asking Fish about us and using the name “holyfire”:

Darwin, what about the teachings at www.pathoftruth.com their teachings appear to be sound and biblical. Thanks”

I suppose Lem would argue that he only meant he was not using his handle, “holyfire,” with us; however, the point was not about us, but about him and his relationship to God. He leads us to believe he is obeying when, plainly, he is a liar.

On now to Darwin Fish – we have had him entered into our false teachers section for years now. He replied to Lem on his blog and in an email, giving Lem his judgment about us, classifying us as false teachers. I reply to that judgment.

He is right about that. We do reject Luke 16:19-31, with a comprehensive explanation why. For this, he believes we are false teachers. Understandable, so far.

Fish writes: “They teach to abstain from foods (1 Timothy 4:3; Hebrews 13:9; www.thepathoftruth.com/teachings/christiandiet.htm). Romans 14:17 says, ‘the kingdom of God is not eating and drinking’. This website thinks it is.”

Going to the logical conclusion of mocking Biblical dietary guidelines, Darwin Fish must think nothing of eating skunk, rat, cat, dog, or mouse (which, according to God, are no worse than pork, shrimp, or lobster) or something having been strangled or dying of itself or which has never been bled or properly processed.

“Do we then make the Law void through faith? Let it not be! But we establish the Law” (Romans 3:31 MKJV).

Imagine that! Establishing the Law by catering to the lusts of the flesh! Fish teaches that indulging in the sexual lusts of the flesh is not only acceptable to Jesus Christ, but also necessary at times. Thus, it can also be concluded that he would say that the apostles themselves would have masturbated, seeing they had forsaken wives and were but ordinary men (which they were). Follow his theory and teaching to a reasonable, indeed, an unavoidable, conclusion, we would have to concede that Jesus Christ too was free or apt at times to masturbate, seeing as how He was tempted in all points we are:

“For we do not have a High Priest Who cannot be touched with the feelings of our infirmities, but was in all points tempted just as we are, yet without sin” (Hebrews 4:15 MKJV).

Darwin Fish has no recognition of the words “yet without sin” concerning our Savior, Whose mission was to give us His life that we might withstand temptation and overcome, even as He did.

“For in that He Himself has suffered, having been tempted, He is able to rescue those who are being tempted” (Hebrews 2:18 MKJV).

Darwin Fish thinks himself to be a preacher of the Gospel and a teacher of the Law of God as a “Jew” (Christian). Here are some words for him:

Romans 2:17-24 MKJV
(17) Behold, you are called a Jew, and rest in the Law, and boast in God;
(18) and know His will and approve the things excelling, being instructed out of the Law;
(19) and persuading yourselves to be a guide of the blind, a light to those in darkness;
(20) an instructor of the foolish, a teacher of babes, who have the form of knowledge and of the truth in the Law.
(21) Therefore the one teaching another, do you not teach yourself? The one preaching not to steal, do you steal?
(22) The one saying not to commit adultery, do you commit adultery? The one detesting idols, do you rob temples?
(23) You who boast in Law, do you dishonor God through breaking the Law?
(24) For the Name of God is blasphemed among the nations because of you.

Away with you, Fish, blasphemer, deceiver, defiler, child of Satan. May you be exposed before all for what you are.

We do not think the Kingdom of God is eating and drinking any more than we think the Kingdom is clothing when we advise people to dress modestly and as men and women ought to dress to distinguish the sexes from one another, even as the Bible advises.

We do not think the Kingdom of God is eating and drinking any more than we think the Kingdom is sterilization because we advise people to practice sanitation, quarantine, and hygiene when dealing with disease.

Over the centuries, many have died because of disregard on the part of medical doctors and staff for practicing such principles. It wasn’t until the 1800’s that healthcare workers began to awaken to age-old godly, Biblical counsel that is wise, practical, and lifesaving. This counsel has been scorned by the wise in this world, by masturbators like Darwin Fish, who know much better than God.

“Then do not let your good be spoken evil of, for the Kingdom of God is not eating and drinking, but righteousness and peace and joy in the Holy Spirit” (Romans 14:16-17 MKJV).

We will not let our good be spoken evil of, Darwin. Do you think the Kingdom of God is righteousness, peace, and joy in the Holy Spirit, or do you think it is sensual enjoyment and orgasm?

Fish continues: “They think the lake of fire is a place of purging and cleansing rather than ultimate condemnation and torment forever (www.thepathoftruth.com/teachings/restitution/the-lake-of-fire.htm).”

Fish also writes: “They also teach you must keep the Sabbath (www.thepathoftruth.com/teachings/sabbath.htm).”

Wrong. We do not teach that one must keep the Sabbath to be saved, though it is easy to see how a self-appointed teacher, intent on sexual fulfillment, will not be able to concentrate properly on what is said and therefore misinterpret it.

What we do teach is that the weekly Sabbath has never been done away and will be kept by every person when their time comes. We say it is a commandment that must and will be fulfilled in all, as the Lord grants it to every man in his order.

While the Sabbath is a commandment of God, man will have learned that he cannot keep God’s commandments – without God’s grace. Therefore we do not teach that man must keep the Sabbath in order to be saved, but if he is saved and enlightened, as he will be in due time, he will keep the Sabbath, for he will know that God has never annulled or changed it, as evildoers have determined. So yes, the Sabbath must and will be kept, but not by those who think to save themselves.

Finally, Fish writes Lem to say, “He also lists me as a false teacher (1 John 4:6; www.thepathoftruth.com/false-teachers/index.htm).”

Yes, Darwin Fish, in that you are right. Fish, Darwin: Must Everything Be Spelled Out in the Bible? And your point is?