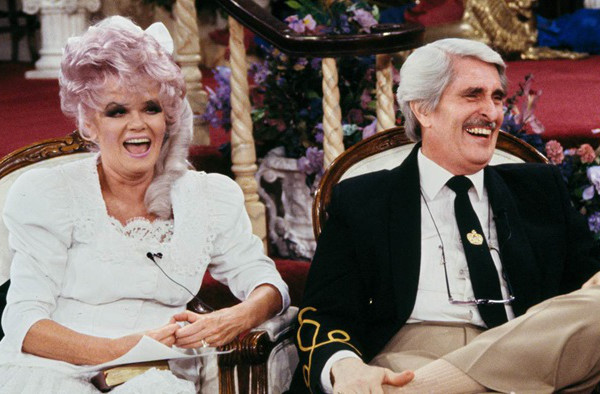 The “Trinity Broadcasting Network,” also known as “The Blasphemy Network” (TBN), presents Christianity as a carnival – “a frenetic disorganized (and often comic) disturbance suggestive of a large public entertainment.” This is the work of Paul and Jan Crouch and their associated band of thieves, knaves, liars, and pretenders. But God isn’t mocked. “For he sowing to his flesh will reap corruption from the flesh” (Galatians 6:8 MKJV).

Ok my question.? What is your opinion of TBN and it’s founders jan and Paul crouch! Are there any decent truth baring messengers of god anymore that haven’t sold out to the world?

I’m so disappointed what I see in the name of god while practicing apostasy ? Do they not fear god? That goes for swaggert, oral roberts! ! And some of the preachers that have been in the way for many years! I just don’t understand how they have no fear of gods judgement!

I rarely watch Christian t.v because of the carnival atmosphere!

How goes the battle of faith? Always know the Lord is faithful to hear and answer all legitimate cries and needs. You need wisdom? Ask Him for it and believe you’ve received, and you’ll have all you need.

“But if any of you lacks wisdom, let him ask of God, who gives to all liberally and with no reproach, and it shall be given to him” (James 1:5 MKJV).

“And all things, whatever you shall ask in prayer, believing, you shall receive” (Matthew 21:22 MKJV).

You need to know that Jimmy Swaggart, Oral Roberts, and Paul and Jan Crouch are not men and women of God. They are salesmen, exhibitionists, charlatans, and false teachers. The same goes for any who appear as ministers of the Lord on TBN – no exceptions; they are all devils. I find the Crouches especially demonic. These mercenary witches and sorcerers all glory in the spotlight, promoting themselves in the Lord’s Name and falsely representing Him for gain and acclaim. As you say, these people have no fear of God.

And you rightly used the description of a “carnival atmosphere” with them. TBN is nothing more than a religious circus, deceiving the simple and lovers of pleasures in the Name of Jesus Christ. These people are brazen in their ways.

Jude 1:11-13 MKJV
(11) Woe to them! For they went the way of Cain, and gave themselves up to the error of Balaam for reward, and perished in the gainsaying of Korah.
(12) These are sunken rocks in your love feasts, feasting together with you; feeding themselves without fear; waterless clouds being carried about by winds; fruitless autumn trees, having died twice, having been plucked up by the roots;
(13) wild waves of the sea foaming up their shames; wandering stars for whom blackness of darkness has been kept forever.

They’re there to attract and entertain the world for gain and pleasure (Proverbs 7). The word “carnival” has its origin in carnality, which is ever in opposition to Jesus Christ.

2 Timothy 3:6-9 MKJV
(6) For of these are those who creep into houses and lead captive silly women loaded with sins, led away with different kinds of lusts,
(7) ever learning and never able to come to the full knowledge of the truth.
(8) But as Jannes and Jambres withstood Moses, so these also resist the truth, men of corrupt mind, reprobate concerning the faith.
(9) But they shall proceed no further. For their foolishness shall be plain to all, as theirs also became.

“For to be carnally minded is death, but to be spiritually minded is life and peace because the carnal mind is enmity against God, for it is not subject to the Law of God, neither indeed can it be. So then they who are in the flesh cannot please God” (Romans 8:6-8 MKJV).

Paul adds about the Crouches and TBN:

The word “carnival” is derived from the Medieval Latin, carne vale, meaning “flesh, farewell!” This explains the presence and nature of carnivals worldwide (such as “Mardi Gras”) preceding Lent.

Lent, by dictionary definition, is, “A period of 40 days before Easter during which many Christians do not eat certain foods or do pleasurable activities as a way of remembering the suffering of Jesus Christ.”

It’s not my purpose here to get into how Lent is vexing to the Spirit of Christ, Who freely grants repentance and obedience to those who believe without ritual, reenactment, or works of the flesh trying to get rid of the flesh, an absurdity. The point for now is that the carnival preceding Lent is man’s idea of his last chance to celebrate the lusts of the flesh before they’re put away.

That’s why carnivals are licentious affairs, masquerades where people “let their hair down” to be whatever they want in corruption.

Doesn’t that exactly describe the antics on TBN? There you see spiritual whoredom perpetrated by people wearing masks, stamping God’s endorsement on whatever their corrupt hearts desire. They put the Day of Judgment, Christ’s appearing, into the future, when they expect they’ll be able to make up for fleshly indulgences now. Blinded by sin and unbelief, they don’t consider the terrible hangover that follows wanton partying, or the dreadful harvest for which they so diligently sow in the flesh.

Romans 2:5-8 ESV
(5) But because of your hard and impenitent heart you are storing up wrath for yourself on the day of wrath when God’s righteous judgment will be revealed.
(6) He will render to each one according to his works:
(7) to those who by patience in well-doing seek for glory and honor and immortality, he will give eternal life;
(8) but for those who are self-seeking and do not obey the truth, but obey unrighteousness, there will be wrath and fury.

For the antidote to all religious tomfoolery and anti-Christ self-glorification, receive the sober, life-giving teaching of the Lord, beginning with The True Marks of a Cult and Diabolical Doctrines.