On September 24, 1996, Marilyn prophesied that the Lord was taking me, as He did Moses, for trespass, and that He had a ministry in the next world for me even as He had for Moses (as was seen on the mount of transfiguration). There came a resignation on my part, with sadness, and in this circumstance came this song which expresses that God does have a place reserved for saints. It is the destination of every believer, the goal of his spiritual trials and journey. 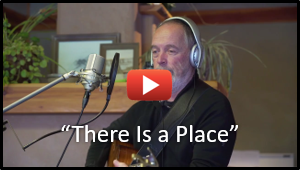 There is a place not far away

A place for which saints long and pray

And when they go, they’re there to stay…

There’s little here that we can bring

There is no doubt death has its sting

But what awaits will make us sing…

Goodbye to what has been before

Hello to what is held in store

We cross the sea to a glorious shore…

We must let go of near and dear

He’ll wipe away our every tear

In Christ we know we needn’t fear…

There is a place not far away

A place for which saints long and pray

And when they go, they’re there to stay.

Look to Him
We met Alan Gilbert, a young man who had been in a terrible car accident which left terrible consequences on body and mind. While he would put on a brave face, we knew it was a put-on. This song came to confront him with reality and to encourage him to repent and believe. He went away apparently as hardened as ever. The mystery of iniquity is something at which to marvel.
The Flutterby (or) The Shadow of the Gallows Tree
Of all my writings, there are two that were written in 2 sittings, years apart. These were the first ones I ever wrote, and this one, interestingly enough, speaks of two births. While I had known the first, I had written of it but did not write of the second, which is the resurrection, until I had known it as well. It is therefore most befitting that the words of this writing came in two parts. The first part came only as a poem, words. It is all now a song though the music did come somewhere inbetween the two sittings.
It's Great to Be Somebody
I knew a man by whom I met Judas Iscariot. Judas, I learned, was a glory seeker, one who wanted in on the best this world had to offer and who was prepared to betray any association to get what he wanted. Ironically, what he wanted was belonging, acceptance, social security. He lost it all or rather, lost all opportunity of gaining such because he never did have it.