While I called this song the above name 20 years ago, I would not do so now. The power of Jesus as the Pentecostal circles like to call it is nothing less than Christ in us, the hope of glory. His Spirit we receive not while seeking power but while seeking to do His will in reality and not as we perceive it. 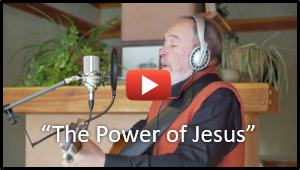 If you try to live the Jesus life

You’d rather eat peas with a butter knife;

That’s how it is if you don’t have the power.

The disciples walked with Him three years

And at last their efforts came to tears

When Jesus died and they were without power.

But at Pentecost in the upper room

They were filled with the Holy Ghost

And they had power…

Yes, at Pentecost in the upper room

They were filled with the Holy Ghost

And they had power,

Today there is a form of godliness

And souls are falling in the deep abyss

And all because some just don’t have the power;

But if you will come and ask of Him,

He’ll fill you right up to the brim

And you’ll be overflowing with Holy Ghost power.

Farewell
It seemed we were saying farewell to all things of our past, not just human friends or acquaintances. It also seemed I was prophesying a parting in the future but which would come to an end, never to happen again.
The Very Best
Simple and self-explanatory.
A Deadly Pull
I think that one of the greatest battles I have ever had has been to forsake family and more particularly my parents, and perhaps most particularly, my father. His draw on my heart was so powerful, so very powerful. In his last years, his state was so pitiable that it was very hard for me to refuse him any wishes. It was agonizing indeed. But he died and was buried on my birthday, April 1, 1985. His death was the morning after I received a vision of the Lord standing up to put a stop to the enemies who were tormenting me. I did not know anything of my father's death until the following morning, or that his death and the vision were related. In his death, I felt loosened, with new freedom and power.