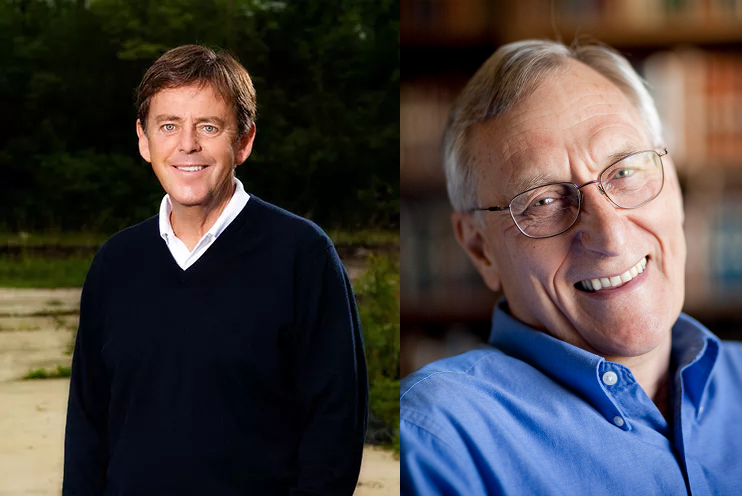 A site visitor asked us about a teacher, Alistair Begg. Paul’s reply:

You need to know that orthodox Christianity, under whatever name, be it Calvinism or Arminianism or any other set of doctrines taught in nominal Christian churches, is full of darkness and lies. We prove it on our site – read The True Marks of a Cult and Diabolical Doctrines.

“Therefore Jesus also, so that He might sanctify the people through His own blood, suffered outside the gate. Therefore let us go forth to Him outside the camp, bearing His reproach. For here we have no continuing city, but we seek one to come” (Hebrews 13:12-14 MKJV).

“Therefore come out from among them and be separated, says the Lord, and do not touch the unclean thing. And I will receive you and I will be a Father to you, and you shall be My sons and daughters, says the Lord Almighty” (2 Corinthians 6:17-18 MKJV).

Alistair Begg is just another of the many cultists gathered in his particular religious camp of men, promoting manmade doctrines and filling the earth with a counterfeit form of Christianity.

Begg says of those who hear the Gospel preached (or what he presumes is the Gospel), “And if you choose not to respond it’s your own fault, not God’s.”

It’s true men are called to repent and are held in account for what is required of them. There’s never fault with God. However, Begg’s is the gospel of man’s righteousness, not of the grace of God in Jesus Christ. As He said:

“No one can come to Me unless the Father Who has sent Me draw him, and I will raise him up at the last day. It is written in the Prophets, ‘And they shall all be taught of God.’ Therefore everyone who hears and learns from the Father comes to Me” (John 6:44-45 MKJV).

If God isn’t drawing, no man comes. Yet, because God is Sovereign and doesn’t draw all people presently, He isn’t at fault. As it is written:

Romans 9:20-23 MKJV
(20) No, but, O man, who are you who replies against God? Shall the thing formed say to Him who formed it, Why have you made me this way?
(21) Does not the potter have power over the clay, from the same lump to make one vessel to honor and another to dishonor?
(22) What if God, willing to show His wrath and to make His power known, endured with much long-suffering the vessels of wrath fitted to destruction;
(23) and that He might make known the riches of His glory on the vessels of mercy which He had before prepared to glory.

Begg preaches man’s righteousness – “I choose Christ,” which is a lie. Those who do the work themselves remain in their sin, becoming proud and unbearable. Read The False and Misleading Gospel of “Accepting” Jesus Christ.

Begg also sells a book on his site that supposedly explains the trinity (What is the Trinity?). No true man of God sells books purporting to teach the things of God. What you have here is a preacher of man’s doctrines teaching falsehood and selling it as truth.

Here is the summary of the book:

“This much is certain. Had Christian faith merely been a human invention, it would never have had a doctrine of trinity. This doctrine is too thorny to understand, and too difficult to explain, for anyone to have deliberately fabricated it. There is no other religion that has anything remotely like this. No, this is not the fruit of our imagination but a doctrine of the way things are. God is triune. And knowing him in his triunity is not only central to Christian faith but, without this truth, that faith is not Christian at all. Given this doctrine’s centrality it may seem surprising that we have no single verse in the bible, or even a single passage, that explains how it is that God can be one in being and yet within his being there can be three centers of self-consciousness, the Father, Son, and Holy Spirit. Why is this? The teaching that God is triune has to be constructed from many passages for two main reasons. First, this is so because there are many facets to it. It is not a simple doctrine. And, second, God’s disclosure of himself did not take place all at once. He revealed his triune nature only gradually and across large stretches of time. It is therefore revealed across a large swath of Scripture.”

The writer, David F. Wells, is claiming the trinity must be true because you can’t understand or explain it. Wow! How much sense does that make? And not only does he say it’s true, but he calls it the foundation of godly faith. It’s so grand, important, and impossible to fathom, it’s even required millennia to reveal it!

Explain to me how a revelation remains inexplicable, yet so important to faith in Christ, which faith, the Scriptures declare, is the substance of things hoped for. The true faith once delivered to the saints, for which we contend (Jude 3), is pure, one that has hard evidence and a sure knowledge. How can it be otherwise?

How could the ancient believers have known God at all, according to Wells and Begg, since they were ignorant of the great secret that He is in fact three gods? They all thought they were worshipping the One True God, which is how He revealed Himself to them, only to find out now there are really three of Him… poor misguided souls!

So explain to me how one comes to know God by a revelation that confounds the mind and defies explanation. If this isn’t nonsensical, superstitious mumbo jumbo, what is?

Contrary to what Wells says, the trinity has much in common with other heathen religious beliefs, because that’s where it comes from. This also explains why the trinity isn’t found in the Bible, except when men deconstruct it and destroy themselves in the process. Read The Asininity of the Trinity.

Begg says of the trinity book he promotes:

When Begg says the book could have helped him grasp “this vital doctrine,” he means it would have taught him how to present the trinity as the essential object of his faith – in other words, to tout his false god. These idolaters have become well practiced at bamboozling people with their slick explanations, but none of them can actually explain the trinity to the satisfaction of a sane mind, because the trinity defies all reality. Notice how it contradicts the nature of all God has created, from which Jesus often drew illustrations to teach about Him. Where do you find a three-in-one creature?

When men of faith in the One True God, Creator of Heaven and Earth, expose the trinity for the fraud and false god that it is, idolaters like Begg and Wells show their fangs and confirm their lineage comes through John Calvin, as described by The Fruit of Cain Multiplied: The Murderer John Calvin. These are the vicious snakes whom the Lord Jesus Christ rebuked in Matthew 23.

Other writings on our site that come against falsehood, which Begg represents and teaches: The Restitution of All Things, Diabolical Doctrine: The “Lord’s Supper”, and Water Baptism.

We point to the Lord Jesus Christ, Who is the Truth, teaching what He says and requires, and confirming what He does for those who believe Him. We aren’t here to fill anyone with doctrine, but to present Him to the world.