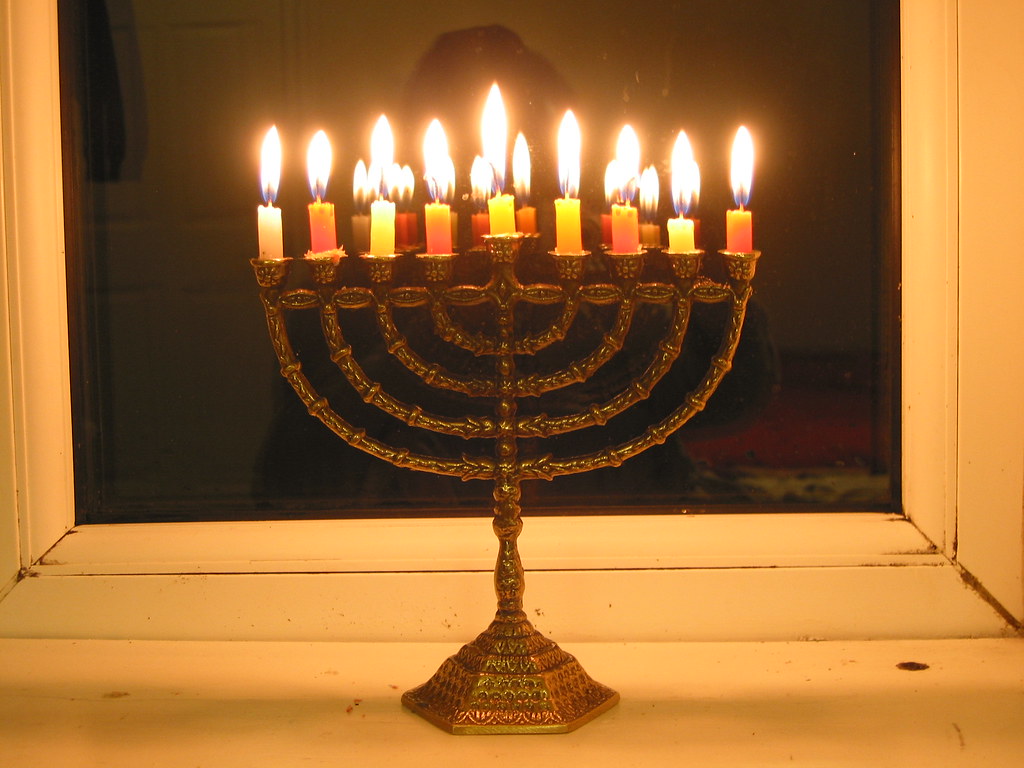 A Youtube visitor watched a video, Merry Christmas From the Angry Farmer, and asked the question, “Do you feel the same way about Jewish Chanukah?”

Yes, absolutely. Chanukah (Hanukkah) is another man-made celebration. It commemorates the Jewish rebellion against the punishment the Lord inflicted on them because of their rebellion. That’s adding sin to sin.

It is certainly NOT a solemn feast or festival of the Lord. And because Jesus was present at such feasts as the Feast of Dedication, aka, Hanukkah, doesn’t mean He was there to celebrate; He was there to address an erring people.

The Jews have only ever suffered violence at the hands of their enemies when they weren’t believing the Lord and keeping His Law. The whole of the Old Testament testifies to this fact, and this Truth hasn’t and will never change. When they do look to Him with sorrow and humility, He will deliver them and the whole world will know it is God that saves.

Let’s take a look at the abbreviated history:

“Mattathias killed a Hellenistic Jew who had stepped forward to take Mattathias’ place in sacrificing to an idol as well as the Greek officer who was sent to enforce the sacrifice. Afterwards, he and his five sons fled to the wilderness of Judah. After Mattathias’ death about one year later in 166 BCE, his son Judah Maccabee led an army of Jewish dissidents to victory over the Seleucid dynasty in guerrilla warfare, which at first was directed against Hellenized Jews, of whom there were many. The Maccabees destroyed Greek altars in the villages, circumcised boys and forced Hellenized Jews into outlawry.[2] Judah’s nickname “Maccabbeus,” now used in popular culture to describe the Jewish partisans as a whole, is taken from the Hebrew word for ‘hammer’“.

“The revolt itself involved many battles, in which the Maccabean forces gained notoriety for their use of guerrilla tactics and their speed and mobility, in contrast to the slow and bulky Seleucid army. After the victory, the Maccabees entered Jerusalem in triumph and ritually cleansed the Temple, reestablishing traditional Jewish worship there and installing Jonathan Apphus, Judah’s youngest brother, as high priest. A large Seleucid army was sent to quash the revolt, but returned to Syria on the death of Antiochus IV. Beforehand, Judas Maccabbeus made an agreement with Rome and became allied, tying the hands of the weaker Seleucid Empire. Its commander Lysias, preoccupied with internal Seleucid affairs, agreed to a political compromise that restored religious freedom.“

Now let’s see how the Lord reacted to the violence and “heroism” of the Maccabees:

“All five sons of Matthias died violent deaths: Judas and Eleazar died in battle, Jonathan was betrayed and killed by the Seleucid general Tryphon, Simon was killed at a feast in Jericho by his son-in-law Ptolemy and John Gaddi was seized and killed by the sons of Jambri from Medeba.“

It seems the Lord brought His Hammer down on the Maccabees. Is that how the Lord rewards the patriarchs, prophets and judges that believed on Him for victory? Was Gideon cut down by his own son-in-law? Was he cut down at all? History is a manifestation of the Lord’s will and perspective.

“According to the Talmud, one of Judaism’s most central texts, Judah Maccabee and the other Jews who took part in the rededication of the Second Temple witnessed what they believed to be a miracle. Even though there was only enough untainted olive oil to keep the menorahs’ candles burning for a single day, the flames continued flickering for eight nights, leaving them time to find a fresh supply. This wondrous event inspired the Jewish sages to proclaim a yearly eight-day festival.“

However, then consider the following:

“The first Book of the Maccabees tells another version of the story, describing an eight-day celebration that followed the rededication but making no reference to the miracle of the oil.“

The Lord doesn’t send mixed signals. He didn’t provide for the widow of Zarephath only to strike down her child afterwards. He wouldn’t have provided miracle oil for the Maccabees only to strike them all down including Jonathan Apphus their appointed High Priest. Clearly the Lord was not with them and therefore there was no miracle oil burning for eight days. It’s nothing but Jewish folklore.

The Maccabees ought to have submitted to the rule over them, just as Jeremiah instructed the people to submit to their oppressors then. Think about it. If the Lord truly honoured the Jewish spirit of rebellion against rulership over them, why did He send Rome to wipe out Jerusalem and the Temple according to the prophecy of Jesus Christ?

It’s all junk, including the 9-armed Hanukiah you never see in Moses’ Law. If Aaron’s sons were struck dead for making up their own incense recipe, how do you think the Lord feels about 9 candlesticks on a Menorah? I can tell you right now that it’s man’s presumed righteousness and God hates it.

Why do you think Chanukah has become so much like Christmas? And why do you think the Jews have basically endorsed it as a stand in for Christmas? Hanukkah and Christmas are both growing from the same rootstock of idolatry and rebellion, and God hates them.

Message to Israel
A message to Israel - May, 2009.
Uncircumcised Ears Can't Hear
Readers response: You must be kidding.
The Son of Man and His Mission in the Israel of God
Who is the Messiah, if not God? Who is this Son of Man that fulfills the Law and the Prophets? What does it mean for those who believe and for those who don’t? What a day it is when the Messiah appears!
Subscribe
Login or Register
You must login or register to comment
15 Comments
Newest
Oldest Most Voted
Inline Feedbacks
View all comments