Ingrid sent this message in response to a mass mailer about the death of Rachel Corrie:

I am sending you this message because, just like me, you received an email in commemoration of Rachel Corrie’s death a few months ago. In the presentation, it is said that Rachel was a pacifist peacemaker and that her death was cold-blooded murder by an Israeli bulldozer driver who saw her in front of his engine, dumped dirt on her, then purposely drove over her body.

Since the presentation also claimed that Israeli forces gave a totally different version of the story, I decided to check it out. While I was at it, I also checked out what the organization Rachel belonged to stood for.

While I recognize that it is entirely possible that the version given by the Israeli forces could be deceptive in order to cover up what happened, I must say that what I read was enough to cast serious doubts on the veracity of the claims made in this presentation.

Click HERE to see the pictures referred to in the next portion.

First, and this was recognized and corrected by worldwide media, the first picture leads the reader to believe that the bulldozer was at a great distance -the driver could see Rachel and purposely held to his course and ran over her, with the next picture showing Rachel after she was injured. However, and even according to Rachel’s friends, the first picture was taken at least 45 minutes prior to the accident, and the bulldozer it shows is not even the one that ran over her. You can take a look for yourself; the light is different, so are the horizon line and the bulldozer. You should also read these articles: http://www.jewishvirtuallibrary.org/jsource/myths/mf24.html#p and http://www.peacewithrealism.org/corrie.htm.

Second, let’s consider what Rachel stood for and what she was doing there. What business did she have to try to stop a military operation uncovering weapon caches and tunnels allowing them to be secretly introduced into Gaza, and from there, used to commit suicide attacks in Israel? How pacifist is it to protect weapons for violence and to hinder operations trying to uncover and stop them? 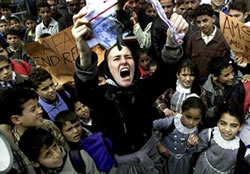 Third, how much of a pacifist was Rachel Corrie anyway? This picture (© Associated Press) shows Rachel at a rally in Gaza on February 15th, 2003, burning a mock U.S. flag, among children. Some example of pacifism!

So-called “factual” information is forwarded every day, such as the slide show you and I received. Before we forward it on, is it not our responsibility to verify whether it is true or not, or do we want to believe and propagate lies?

For a different perspective on the subject as well as the current Palestinian-Israeli conflict, please read Moral Clarity in Gaza by Charles Krauthammer.

Click HERE to go to our “Israel and the Jew” section.

What Is a Jew?
Readers response: Remove me from this email list immediately. You are not a Jew no matter what you say.
Rachel Corrie: A Pacifist? Pictures
Pictures of Rachel Corrie posed by the Associated Press
Fear God, Not Muhammad
Readers response: You write something distressing in your message below, namely equating Hitler and Muhammed’s respective positions on Jews.
Subscribe
Login or Register
You must login or register to comment
0 Comments
Inline Feedbacks
View all comments