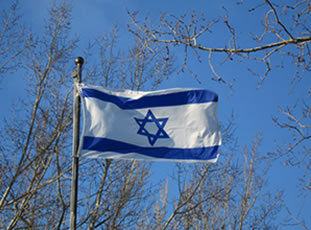 “After two days He will bring us to life; in the third day He will raise us up, and we shall live in His sight” (Hosea 6:2 MKJV).

In the year 2006, on the Sabbath, December 23, at 10 AM, we raised the Israeli flag at Harvest Haven Market Farm. Twelve were in attendance. They were Paul Cohen, Sara Schmidt, Lois Benson, Trevor Benson, Mark and Mariko Benson, Dena Dahl, Ingrid Nicolay (now Benson), Sean Fife, and Jonathan, Marilyn and Victor Hafichuk. The words spoken in prayer were, in essence, “As we raise the flag of Israel, so shall we raise up the nation of Israel.” There was great thankfulness.

We raise the Star of David at our farm as a token of solidarity with Israel.

Through a recent series of fast-paced and remarkable coincidences, we were suddenly propelled on to the world scene of politics and conflict focusing on the Middle East, and, more specifically, Israel. While we in Christ (Yeshuah HaMashiach) have been fighting spiritual warfare for decades, we have not been personally involved in a manifest way with physical Israel (except when I met Paul in Israel, the Lord having sent me in 1979). Now we are. We have decided to raise the Star of David at our farm as a token of solidarity with Israel. Read The Star of David: A Better Perspective.

The sad thing prevailing throughout the world is the wilful ignorance of the facts, historical and otherwise, concerning the conflict between Israel and the Arabs and Palestinians. The facts are available. The problem, however, is not the lack of a well-documented history or the capacity to comprehend it; the problem is that men’s hearts are at enmity with their Creator, the God of Israel. The world sits by and watches injustice, believing lies, in the name of Christianity and any other name convenient, while Israel and Jews stand alone.

What the world does not know is that it is under God’s judgment through Israel. All are being confronted with a decision. Israel is God’s chosen nation, the “people of the Book,” as the Koran calls them, and the “beloved for the fathers’ sakes,” as the New Testament calls them. Those in neutrality or choosing against Israel will be found to be at enmity with God.

We stand with Israel, as led by the Spirit of Yeshuah, its unrecognized Messiah.

The same goes for countries as well as people. I am so thankful to see the Prime Minister of Canada, Stephen Harper, and his government standing for truth and justice concerning Israel. We also stand with Israel, as led by the Spirit of Yeshuah HaMashiach, its unrecognized Messiah, Who is coming for them.

There are two elements here, physical and spiritual. Is the physical element, the nation of Israel, cast off forever? Not at all! As it is written:

“I ask, however, Have they stumbled so as to be finally ruined? No, indeed; but by their lapse salvation has come to the nations in order to arouse the jealousy of the descendants of Israel; and if their lapse is the enriching of the world, and their overthrow the enriching of the nations, will not still greater good follow their restoration? But to you Gentiles I say that, since I am an Apostle specially sent to the nations, I take pride in my ministry, trying whether I can succeed in rousing my own countrymen to jealousy and thus save some of them. For if their having been cast aside has carried with it the reconciliation of the world, what will their being accepted again be but Life out of death?” (Romans 11:11-15).

As Jesus Christ/Yehoshuah HaMashiach is known as the Son of God, so the nation of Israel is known as God’s son (Hosea 1:1). As God’s Son was planted to bring forth fruit, so was Israel planted to do the same. As God raised His body from the dead by His Spirit, so we in the Spirit of Christ must raise up physical Israel.

No power can withstand the resurrection of Israel to new life.

We stand for Israel, to reconcile it unto God, regardless of the enmity Jews have towards us and the enmity they falsely perceive coming from us because of their experiences with false Christians throughout history and to this present day. We stand with them as unto the God of Israel, the Messiah, by His resurrection power:

“For He Himself is our peace, Who has made both one, and Who destroyed the dividing wall of separation, having abolished in His flesh the enmity, that is, the law of commandments contained in ordinances, that He might create in Himself one new man from the two, thus making peace, and that He might reconcile them both to God in one body through the cross, putting to death the enmity in Himself” (Ephesians 2:14-16 EMTV).

“Having stripped rulers and authorities, He made a show of them publicly, triumphing over them in it” (Colossians 2:15 MKJV).

God sowed, or laid down the body, Israel, in the earth, that the seed might not remain alone, but that it might bring forth much fruit. We, begotten of the Messiah, are that new fruit. Israel has been waiting for its Messiah because it (Israel in the flesh) has been in the grave. We, in His Spirit, now speak to the body and raise it from the dead to newness of life. Spirit and body are to be joined together in resurrection power. The body cannot raise itself up, being dead. Those who criticize the physical Jew for not believing criticize his Maker, his Maker’s laws, and all of nature.

Redemption begins as I forgive my wife, which I publicly declared on December 23, 2006, to everyone at the farm. As Israel has been to its God, so my wife has been to me. While she has openly confessed other gods, and has been unable to redeem herself, I have publicly forgiven her, and now she is redeemed by the power of God.

“I am hurting! I am hurting!” says the God of Israel, Yeshuah HaMashiach, because His people are hurting, and He has come down to save them. God save Israel, His people. Raise them up from the dead for the world to see Your glory, even as we raise up the Star of David, the flag of Israel, to the sky. 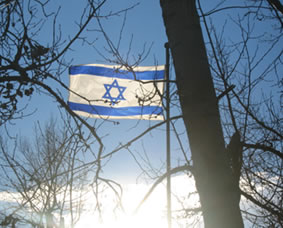 Fear God, Not Muhammad
Readers response: You write something distressing in your message below, namely equating Hitler and Muhammed’s respective positions on Jews.
Eating Your Cake and Having It Too
Michael Freund proposes that non-Jews showing solidarity with Israel are a great source of support as long as they do not try to proselytize. What are you afraid of, Michael, if you are walking in the true faith of God? And if you and your people do not have faith, will you cut off all free speech that does not advocate your destruction, but salvation and reconciliation with your God?
Regarding the Jews
You know what their problem is, completely? It is not us, not lack of knowledge, not persecution, not Christianity, not Muslims, not descendants of Ishmael, not Middle East real estate, not a false witness of Christ or the preaching of a false Christ. It is that they reject Jesus Christ, case closed.
Subscribe
Login or Register
You must login or register to comment
0 Comments
Inline Feedbacks
View all comments