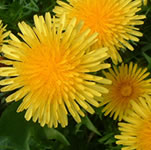 We at Harvest Haven have decided to adopt the dandelion as our official symbol, and we are excited about it.

When Marilyn and I, Victor, first purchased our home at Moon River Estates in April of 1988, we decided not to use chemical pest control in our yard unless there was no other choice. We then marshaled any available help in order to remove the weeds by hand from our half-acre of lawn. Instead of entertaining or talking with friends or neighbors, or with each other, while sitting around, we would visit on the lawn.

I prayed and heard, “These things are defeated from above.”

The main “weed” was the dandelion. Countless hours were spent with body-aggravating labor, getting down on hands and knees with a screwdriver, hour after hour, day after day. The weeding tested all associates exposed to it, even those who were paid to do it, weeding them out, some in minutes, some in hours, while some faithfully answered continuously, as needed, to the strange “call of duty.”

The physical labor was not the only challenge. There was also the psychological warfare. “Are we crazy? Aren’t there better things to do with our time and energies? How boring! How tedious!” Add to these the social stigma and embarrassment. There were the taunts, hoots and howls from the neighbors, who thought we were crazy. “Why don’t you cut your grass with scissors? Ha, ha!” While their children were saying it, we knew some of their parents were thinking it.

One day, I was overwhelmed with the apparently unconquerable job, having nobody to help keep up with the “weed” that never quits. I prayed and heard, “These things are defeated from above.” I thanked the Lord, believing He would provide a way.

My brother, Archie, came by that afternoon and helped for about an hour and left to do other duties. I continued on my own and in a few hours the job was done, a job that initially was certain to take several days. I could not explain it, except that “these things were defeated from above,” by inexplicable means.

I was very thankful to the Lord for this miracle. I have heard many things from Him and He has manifested Himself, giving me direction on many occasions. I considered that if I was being very silly in this matter, He would have told me. Instead, He taught me to look to Him for the solution to any problem that would arise. Never once did He rebuke me for, or advise me against, controlling our lawn against weeds the hard but clean way.

It is remarkable how much one can learn from seemingly simple and apparently meaningless occupations. Through these circumstances we learned laws and principles of life. I will not get into those now, but they are neither few nor insignificant.

We also learned somewhat of human nature. Would the proud person weed a lawn in public? It was interesting to see the reactions and see the Lord separate people into two groups.

Furthermore, I was finding myself free to pray and to meditate. While on the lawn, “on my knees,” the Lord would speak to me about many matters and give me doctrines and revelations for others and myself. At times, I would have to run into the house and share what I was hearing with Marilyn, or someone else, or write it down.

I saw how the dandelion is much like the Lord Jesus Christ.

I was also becoming more and more aware of the significant health and nutritional benefits of the much-maligned dandelion. We knew that many were consuming the leaves as a salad vegetable (the Italians are known for this diet habit) and grinding the root to make a substitute coffee beverage. I began to nibble on the leaves as I weeded and tried to encourage others to do so but nobody was interested. “I’ll help you pick them if I must, but I will not eat them!” was the reaction.

A Symbol is Born

In seeking an appropriate symbol for Harvest Haven, we pondered in vain. One day, Mariko, Mark Benson’s wife, in thinking outside the box, conceived using the dandelion in our brochure. What would people think? I began to realize the implications, particularly in relation to our lives, physically and spiritually.

I saw how the dandelion is much like the Lord Jesus Christ. Here are the similarities:

The dandelion is everywhere. Jesus Christ is omnipresent.

The dandelion is hated and warred against by almost all people. Isn’t that the way it is with the Lord? “He came unto His own and His own did not receive Him.” He said He was hated by the world because He testified against it.

The dandelion is not a pest, but is good medicine. Jesus Christ, hated by all, is Good Medicine. He is the Good Physician, Who heals, though despised.

The dandelion is bitter to eat but brings health, if consumed. Jesus Christ, the Truth, is bitter to receive, but if received, brings healing and makes the consumer free.

The entire dandelion is health-promoting…the leaves, flowers, stems and root. Jesus Christ is the Savior of all mankind. He is goodness and love, sent to mankind for man’s wellbeing and salvation.

Healing and nourishment happen in the Lord.

The dandelion flower is a golden color. Gold represents God and precious value. The rest of the plant is green, representing life, nutrition and rest. Is that not what the Lord is all about? He came to give us life, to feed us Himself and to give us rest from our labors.

The juice of the dandelion is white. In Scripture, white represents the righteousness of God, which can only come by Jesus Christ.

Remarkably, the juice blackens the skin, though harmless, and likely healthful. To the world, the life of God soils a person. That is why Isaiah the prophet, who saw the coming of the Lord, the manifestation of the Life of God, wrote this:

“He was despised and rejected by people. He was a man of sorrows, familiar with suffering. He was despised like one from whom people turn their faces, and we didn’t consider him to be worth anything” (Isaiah 53:3 GW).

Dandelions bring no harm and are good not only to, but also for us. The rabbits and the deer come to our yard and eat them as well. The birds eat the seeds. The bees love them. The environment loves them, with calcium (an essential ingredient) and elemental balance restored to the earth where dandelions grow. The Lord is good for all. True religion is good for all. Healing and nourishment happen in the Lord.

The dandelion comes as a common weed, unrecognized and unwanted, though far more potent than other plants as a medicinal and healing herb. Jesus Christ took upon Himself the form of a man, humbling Himself to the death of the cross, despised and rejected of men, the Stone rejected, the Bible says, yet full of true value.

Dandelion seeds fly with the wind, like the Word of God that comes from Heaven and goes wherever He wills.

Dandelion seeds drop into the ground and come up again multiplied. Jesus Christ was crucified, buried and raised up again to multiply Himself manifold, in order to bring healing and life to the world. While the dandelion “dies” over winter, it rises again because it is a perennial, even as the Lord is eternal.

Our calling is to do good before God, for Him and for His creation.

It can look messy, especially when dandelions go to seed. That is how salvation works. The work of God in a person’s soul can look quite ugly (take Job for example), but afterwards, we have spiritual health, His work yielding the “peaceable fruit of righteousness.”

Finally, “dandelion” means “teeth of the lion.” Jesus Christ once came as a Lamb, to die for us, but now He comes as the Lion from the tribe of Judah. He comes with teeth. God is a consuming fire, the Bible declares. He comes to judge the earth in righteousness. Nobody fools with a lion, especially This One, Jesus Christ Glorified.

We at Harvest Haven Identify

How do we at Harvest Haven identify with the dandelion? The dandelion, while able to provide abundant health, is despised by many as a nuisance. We have been perceived as strange and troublesome by conventional medicine, by conventional agriculture and by conventional religion, even as a cult. Yet, our calling is to do good before God, for Him and for His creation, to bring genuine health at all levels to those that need and search for it.

While others spray us with 2-4Damnation, just as they do the dandelion, we will continue to return, to rise up and shine, ever hoping that people will eat, instead of kill, us. Yet, children love us as they also love the dandelion’s flowers!

Our dandelion symbol has one stem, two flowers, twelve leaves, and sixty-six rootlets on one taproot. Each of these numbers has significance and is of personal interest to us. It remains for others to determine their significance, if they care to do so.

Harvest Haven’s slogan is “Providing the Essentials of Life.” For those who believe, Lord willing, we are able to provide the physical, mental, and spiritual essentials…salvation for body, mind, and spirit. God has provided them for us and now it is our mission and purpose to share what He has given us with others. That is what Harvest Haven is all about.

Yes, in Jesus Christ, we are that dandelion, and thankful for it! 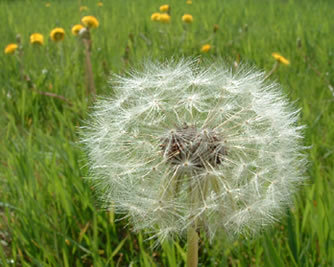