How is it that people can smoke themselves to death or drink their lives into oblivion, and the government makes some lame gestures at trying to say it’s bad for your health? But you dare mention “raw milk” and you have the health police on your door step and all your activities monitored!

Raw milk is a health food in its natural state – no additives, preservatives, GMOs, or other harmful ingredients – just real food that’s good for you.

Michael Schmidt in Ontario, Canada is on a hunger strike until he gets a meeting with Dalton McGuinty, the premier of Ontario, to discuss changes to the sale of raw milk, making it legal for those who choose to buy it. 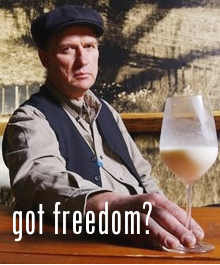 This debate is about the right to make choices. In an interview, Michael Schmidt made an interesting observation, “It’s really more about the right to informed choice, so it’s largely a political issue. I’m not trying to convince everyone else to drink raw milk. I just think that people who want to should have that right. You don’t see the government banning the sale of sliced meat, even though 22 people died during the lysteria outbreak. The hypocrisy is staggering.” (Source: http://www.thegridto.com/city/people/michael-schmidt-raw-milk-activist/)

Here is the link to sign a petition supporting food freedom: http://www.change.org/petitions/government-of-canada-support-food-freedom

Another source of information about Michael Schmidt’s stand for raw milk: http://thebovine.wordpress.com/.

The issue before us is our freedom to choose wholesome food. Do whatever you are able and feel free to do in support of a courageous man with a just cause, and pass along this information to everyone you know!

Can You Vote for a Politician to Turn Men to God?
During the 2008 primaries, someone wrote asking us to pray for a man of God to be elected to lead the United States in righteousness. He did not know that Jesus Christ does not come through heroes or the politicians of this world. Rather than voting for a man who will make others right, you need to get right with God yourself!
God's Word Is Life
A reader's response to "A Curse on the Betrayal of Canada": Reader's response: Who is to say that Stephen Harper is so holy and virtuous to lead us? he only…
A Curse on the Betrayal of Canada
Stray curs gather. Alone, they appear docile, even beneficent, thinking to persuade those whose favor they seek that they are able and willing to serve for good.
Subscribe
Login or Register
You must login or register to comment
0 Comments
Inline Feedbacks
View all comments