This song came for Caren Lampitoc, whom Paul met in Philadelphia.

How different we discovered the Christian walk to be in comparison to what we had expected or were led to believe it would be! It was lonely, painful of soul, friendless, fraught with enemies on all sides and the greatest enemy was on the inside. How we had to do battle with unbelief, with our carnal desires, ambitions, hopes, dreams, with the lusts of the flesh…lusting mostly for social security, belonging, importance, usefulness.

All must be surrendered or lost; there really is no choice in the matter when the call of God is upon one. He that keeps his life loses it and if he loses it for the Lord’s sake, it is still lost, if only for a time, even if replaced with more and better somewhere down the road. The main thing is that one must trust God in it all and let it happen. One must learn and accept that God is in charge of all things, working all for good. 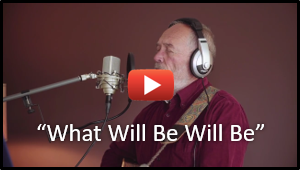 Lord, when You first called out my name,

I knew I couldn’t be the same;

I didn’t know what I would do…or be;

I thought the future I could see.

For awhile I ran in reckless joy;

And slowly I began to understand

That You are Lord and it’s Your hand.

Right now I know that You’re with me

And through these tears it’s hard to see

What’s going on with You and me

But You’ve said, “What will be will be.”

It’s been so hard for me to be so still;

You’ve shown me that I’m the one so cold,

Yet in my ways I’ve been so bold.

Nothing’s going the way I thought it would;

It’s so different and very strange.

Seems no one’s here to come my way.

Got Nothin' to Live For, But Don't Wanna Die
The interesting thing about this song was that at the time it came to me, I had no thoughts, feelings, identification, circumstances, reason, or remembrance of the past to inspire the words; I just woke up and wrote them – no music, just words, if I recall correctly. I just laid the words aside, thinking no more of them until 2016, almost 6 years later. The words were a puzzle to me; I didn't know what to think of or do with them. They didn't express at all how I felt when I received them or when I returned to them years later – those days were long gone. But after I just happened to listen to a song or two by the late Amy Winehouse (not my usual custom by far), who impressed me with her unabashedness, freedom from self-consciousness or effort to sing creatively, I considered those words given me and put them to music. The spirit of the music seemed to be inspired by Amy, a troubled lady who was also crying for help but wasn't blessed to find it in this life. I wished I could have helped her. I then suddenly realized the song expressed exactly how I had felt in 1972 before I was converted. The song was a prequel to the time of newfound joy and freedom in Jesus Christ. Wow! I was thrilled at the realization. But for what purpose the song? I knew the song expressed how many, if not all, feel just before they meet the Lord. They're searching, troubled, lost, confounded, disoriented, not knowing up from down, sorrowful, without direction or purpose. It's a painful time -...
The Father Gave Me Words
We encountered an incident wherein religious people, friendly and all, counseled us to reconsider an undertaking we knew was the Lord's leading. We were learning that Satan's servants are ever there, with Bible under arm, God's praises on their lips, prepared to do battle "with love." The strange thing is that while I recall the Lord giving me what to say to these people, I do not recall what those words were, so occupied I was with learning another lesson.
There's Lots to Be Thankful For
At a time of uprooting and forsaking all once again, my wife was finding it difficult and this song came then. It held the promise of better things ahead as we had always experienced in similar times before. Encouraged, we plodded on.