This satire is an expression of a time oft repeated wherein I felt incredulous and scornful of the thinking of so-called “theologians.” They shape and size God, formulate the things they think He does, analyze Him, dissect Him, figure Him all out, put Him back together again according to their desires and tastes and put Him in a neat box, gift-wrapped and stamped, ready to be reproduced and mass-marketed to the ignorant masses the world over who swallow their doctrines as unsuspecting fish swallow bait, hook, line, sinker and rod.

By the way, God hates the term “theology.” How presumptuous is man that he should dare try to study God! 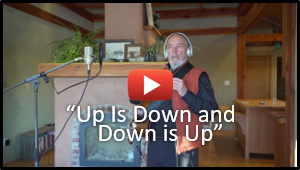 It is commonly believed by small and great

That God dwells in Heaven in royal estate,

That Satan in Hell lives in darkness and hate,

That this will never change.

God IS in Heaven and also in Hell,

The psalmist does declare

And with sons of God in Heaven, says Job,

Satan too is there.

God is in Hell and Satan in Heaven

And only the sincere seeker of truth

God in Heaven, man on Earth

And Satan in Hell is the creed,

Yet Satan walks to and fro in the earth,

And Emmanuel is “God with us” we read.

The Christian is seated in heavenly places,

The heathen dwell in Hell,

Yet both walk the earth with Satan and God

And where who is who can tell?

To know the truth is to shed the lie

And born full of lies we are;

It therefore takes a shedding of self

And to all we’ve been taught we must die.

The answer lies in the Spirit of God

Who leads us to know all things

And once we’ve discovered the answers we’ve sought,

To our souls peace and freedom He brings.

It's Great to Be Somebody
I knew a man by whom I met Judas Iscariot. Judas, I learned, was a glory seeker, one who wanted in on the best this world had to offer and who was prepared to betray any association to get what he wanted. Ironically, what he wanted was belonging, acceptance, social security. He lost it all or rather, lost all opportunity of gaining such because he never did have it.
The Father Gave Me Words
We encountered an incident wherein religious people, friendly and all, counseled us to reconsider an undertaking we knew was the Lord's leading. We were learning that Satan's servants are ever there, with Bible under arm, God's praises on their lips, prepared to do battle "with love." The strange thing is that while I recall the Lord giving me what to say to these people, I do not recall what those words were, so occupied I was with learning another lesson.
There's Lots to Be Thankful For
At a time of uprooting and forsaking all once again, my wife was finding it difficult and this song came then. It held the promise of better things ahead as we had always experienced in similar times before. Encouraged, we plodded on.