At a time of uprooting and forsaking all once again, my wife was finding it difficult and this song came then. It held the promise of better things ahead as we had always experienced in similar times before. Encouraged, we plodded on. 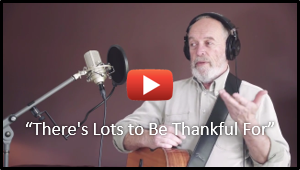 Don’t ever let your bottom lip hang down;

Don’t let it happen when I’m around.

I’d rather see a smile on your face;

A frown on you is so out of place…

You know there’s lots to be thankful for.

Before you know it I’ll be back for more

We all have troubles that are hard to take;

We have bad habits that are hard to break.

Don’t let them get you down for goodness’ sake;

You need to know your happiness is at stake…

Morning’s almost here for us, my friend.

Then tears and sorrow will be at an end;

It won’t be long before for us He’ll send…

Crossroads
This song was written in Israel when a future friend, Paul Cohen, to whom the Lord sent us to speak was confronted with a major decision. This decision had major implications for him either way. He took the right road only to come to many crossroads since.
Cause Me to Hear
A tune the Lord gave me for Psalm 143:8-19
Do or Die
In December of 2010, there came a call to lay down the life for another. There was no one else to do it, and it didn't matter; the duty and appointment were ours alone. It appeared this person's life was on the line. He was suspected and accused of, condemned, and hunted for, alleged horrific crimes in his country far away and many years ago. In my contemplation of these matters, realizing we could lose everything, a tune came to me in the middle of the night of January 30/31, 2011, followed by these words (Unfortunately, I don't recall the tune).