At a time of discouragement I received these words from the Lord in song and at this very moment as I write this introduction years later in 1996 ( the song was written in 1987), I feel down after having spoken to people who do not believe what I say or that the Lord has sent me to them. Yet I have nowhere but onward to go and am persuaded that these words hold true and someday will be fulfilled. 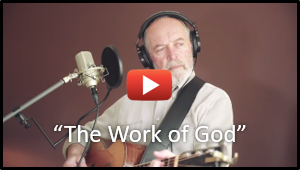 The work of God can be so full of pain and sorrow,

You wonder why you get involved.

Sometimes it gets so hard, you fear to see tomorrow

But all your problems are resolved.

Though blood and tears are shed for those who seem unworthy,

Everlasting strength will make the way

And when you feel your work will only make you dirty,

That’s when you take the time to pray.

For all the good you do, most times you’re only hated.

You work both night and day and often get frustrated.

The time will come you’ll get your pay.

Some day they’ll come from miles around to bless and thank you,

Dandling young ones on their knees.

They’ll be doing and speaking right because they want to,

Their holy ways the Lord to please.

A Deadly Pull
I think that one of the greatest battles I have ever had has been to forsake family and more particularly my parents, and perhaps most particularly, my father. His draw on my heart was so powerful, so very powerful. In his last years, his state was so pitiable that it was very hard for me to refuse him any wishes. It was agonizing indeed. But he died and was buried on my birthday, April 1, 1985. His death was the morning after I received a vision of the Lord standing up to put a stop to the enemies who were tormenting me. I did not know anything of my father's death until the following morning, or that his death and the vision were related. In his death, I felt loosened, with new freedom and power.
Cause Me to Hear
A tune the Lord gave me for Psalm 143:8-19
You Don't Have To
The world rushes headlong not only toward destruction but is there in destruction while it rushes. Priorities are confounded, based on gain and selfishness. Big is small and small is big. What is important and what is not? Is it not the "little things" that count? And has not the preacher said, "All is vanity" after firsthand experience of them?