There exists the notion that victory speaks only of joy, peace, love, rest in their counterfeit forms, the wishy-washy, mushy-gushy kind that has no place in reality. This song expresses the reality. There is war before victory. With war comes bloodshed, hard times, threatenings, loss and destruction, but the victory is there in real terms, earned and established by the Lord. 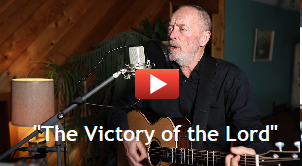 We wash our feet in the blood of our enemies;

Not in vain have we believed for our victories;

Though the trek has been long and full of miseries,

Still the worth has been there all the time.

We are crowned with the helmet of His glory,

Our scabbard filled with the power of His Word;

Though the battle is bloody and gory,

His life He gives by the good news which is heard.

Not in vengeance nor in spite do we revel;

We wrestle not with flesh and blood but the devil;

We fill the valleys and the mountains we do level;

Our goal is righteousness and peace in all the earth.

There was a time when on our backs all men did trample,

At times unbearable if only but a sample,

But His grace He gave to us was more than ample;

He is the Captain of the hosts and our Lord.

Let the powers of Hell advance and do their utmost.

Here on earth we will stand guard at our outpost.

Standing for us, all around us is the Lord’s host;

There is nothing in this whole world to fear.

There's Lots to Be Thankful For
At a time of uprooting and forsaking all once again, my wife was finding it difficult and this song came then. It held the promise of better things ahead as we had always experienced in similar times before. Encouraged, we plodded on.
Look to Him
We met Alan Gilbert, a young man who had been in a terrible car accident which left terrible consequences on body and mind. While he would put on a brave face, we knew it was a put-on. This song came to confront him with reality and to encourage him to repent and believe. He went away apparently as hardened as ever. The mystery of iniquity is something at which to marvel.
You Don't Have To
The world rushes headlong not only toward destruction but is there in destruction while it rushes. Priorities are confounded, based on gain and selfishness. Big is small and small is big. What is important and what is not? Is it not the "little things" that count? And has not the preacher said, "All is vanity" after firsthand experience of them?