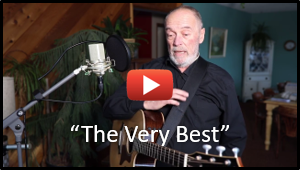 All we need to do is ask and He’ll grant our petitions.

The very best that you can ask is just to be with Jesus.

So many things we often want don’t satisfy when we get them.

Are you ready to leave all behind, let go of all that holds you?

Don’t be surprised if what you get is not what you imagined.

You won’t be disappointed if you ask for nothing but the best.

Growing in Christ Jesus
Deeper and deeper the Lord took us in Him. Now were we seeing good in evil and evil in good, that is, whereas we once thought we knew the difference, now we began to see more clearly. That which we thought was holy was otherwise, both within and without, and that which we thought was wrong was not always so. Needless to say, such experience brings its own torment but God brought us through and delivered us from evil.
Got Nothin' to Live For, But Don't Wanna Die
The interesting thing about this song was that at the time it came to me, I had no thoughts, feelings, identification, circumstances, reason, or remembrance of the past to inspire the words; I just woke up and wrote them – no music, just words, if I recall correctly. I just laid the words aside, thinking no more of them until 2016, almost 6 years later. The words were a puzzle to me; I didn't know what to think of or do with them. They didn't express at all how I felt when I received them or when I returned to them years later – those days were long gone. But after I just happened to listen to a song or two by the late Amy Winehouse (not my usual custom by far), who impressed me with her unabashedness, freedom from self-consciousness or effort to sing creatively, I considered those words given me and put them to music. The spirit of the music seemed to be inspired by Amy, a troubled lady who was also crying for help but wasn't blessed to find it in this life. I wished I could have helped her. I then suddenly realized the song expressed exactly how I had felt in 1972 before I was converted. The song was a prequel to the time of newfound joy and freedom in Jesus Christ. Wow! I was thrilled at the realization. But for what purpose the song? I knew the song expressed how many, if not all, feel just before they meet the Lord. They're searching, troubled, lost, confounded, disoriented, not knowing up from down, sorrowful, without direction or purpose. It's a painful time -...
His Yoke Is Easy
In Winnipeg, we met Henry Unrau, who laboured dreadfully under the Law, thinking he was doing God service. He was a tormented soul but a very self-righteous one who, while seeking counsel and help, quite believed that he was in a position of counseling and helping instead toward those who were not enslaved by service of the letter as was he. What ironies and contradictions in man!