An exhilarating path it is but a lonely one. Each segment of this path brings its trials and troubles but also its rewards along with proof and assurance that any segment of it is more than worth the endeavour. 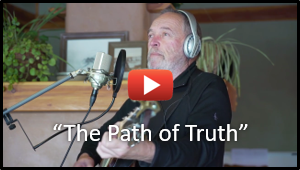 Well, here we go down the path of truth again,

Looking danger in the eye, fearing nothing but the Lord.

But as we go along we find that chains will all be left behind.

The tears we shed both for ourselves and our friends

Aren’t worth comparing to the glory that’ll be ours when we’re done.

But as we go we find it’s true.

I wouldn’t stop and turn around for all the world;

It’s life or death for me

And those who’ve realized the facts of life.

Let come what may even death if that must be

But I’m convinced that I obey the One Who’ll finally set me free.

The light grows bright as I come closer to the end

And worldly pleasures and possessions fade away as so much smoke.

I find a joy within me bubbling to the surface

As in peace I run the race

That will soon give me the prize.

The Father Gave Me Words
We encountered an incident wherein religious people, friendly and all, counseled us to reconsider an undertaking we knew was the Lord's leading. We were learning that Satan's servants are ever there, with Bible under arm, God's praises on their lips, prepared to do battle "with love." The strange thing is that while I recall the Lord giving me what to say to these people, I do not recall what those words were, so occupied I was with learning another lesson.
Look to Him
We met Alan Gilbert, a young man who had been in a terrible car accident which left terrible consequences on body and mind. While he would put on a brave face, we knew it was a put-on. This song came to confront him with reality and to encourage him to repent and believe. He went away apparently as hardened as ever. The mystery of iniquity is something at which to marvel.
Do or Die
In December of 2010, there came a call to lay down the life for another. There was no one else to do it, and it didn't matter; the duty and appointment were ours alone. It appeared this person's life was on the line. He was suspected and accused of, condemned, and hunted for, alleged horrific crimes in his country far away and many years ago. In my contemplation of these matters, realizing we could lose everything, a tune came to me in the middle of the night of January 30/31, 2011, followed by these words (Unfortunately, I don't recall the tune).