Of all my writings, there are two that were written in 2 sittings, years apart. These were the first ones I ever wrote, and this one, interestingly enough, speaks of two births. While I had known the first, I had written of it but did not write of the second, which is the resurrection, until I had known it as well. It is therefore most befitting that the words of this writing came in two parts. The first part came only as a poem, words. It is all now a song though the music did come somewhere inbetween the two sittings. 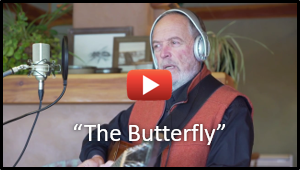 The shadow of the gallows tree

Spreads darkly over the grave,

And in the dust I toss and turn,

Hoping He will save.

I know the work is good as done;

He did it all for me;

He laid my sins upon His Son,

Who suffered the gallows tree.

Some day I’ll be a flutterby,

No more to crawl or squirm,

For I am but a worm.

The angels watch from up above

To see this work beneath;

When God has formed in me His love,

And glorious will be that day

When Jesus Christ is manifest,

The day for which the saints do pray,

The whole world will be blessed.

The heavy stone is rolled away; I’ve risen from the earth.

I have new life and power now; I’ve had my second birth.

The day for Him to judge is here; I sit upon His throne;

He draws His sword a second time and I am not alone.

Yes, now I am that flutterby, no more to crawl or squirm,

For I was but a worm…

For I was but a worm.

The Walk with God
As we continued our walk with God by faith, we were disillusioned about our relationships with religious people and family. We discovered the value of true friendship, the cost of walking with God and how few there were willing to pay the price.
Walk by Faith
This is the first song I ever wrote as a believer in the Lord Jesus Christ...nothing default by any stretch but it amazes me how that we knew so much of what was required of us while yet babes in Christ. Twenty-one years later, I feel we have only been learning what we've known all along, that faith is the key and substance of our walk with God, that we must come away from all carnal thought and participation in order to walk with God by faith and be pleasing to Him.
A Deadly Pull
I think that one of the greatest battles I have ever had has been to forsake family and more particularly my parents, and perhaps most particularly, my father. His draw on my heart was so powerful, so very powerful. In his last years, his state was so pitiable that it was very hard for me to refuse him any wishes. It was agonizing indeed. But he died and was buried on my birthday, April 1, 1985. His death was the morning after I received a vision of the Lord standing up to put a stop to the enemies who were tormenting me. I did not know anything of my father's death until the following morning, or that his death and the vision were related. In his death, I felt loosened, with new freedom and power.