We encountered an incident wherein religious people, friendly and all, counseled us to reconsider an undertaking we knew was the Lord’s leading. We were learning that Satan’s servants are ever there, with Bible under arm, God’s praises on their lips, prepared to do battle “with love.” The strange thing is that while I recall the Lord giving me what to say to these people, I do not recall what those words were, so occupied I was with learning another lesson. 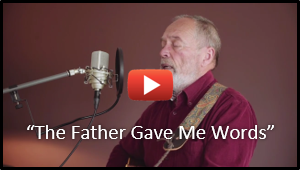 Satan came to my house one evening;

He tried to cast a doubt into my mind.

With his mouth he blessed the Lord

And with his face he flashed a smile;

Satan came to my house one evening.

At the time I didn’t know it was the devil.

He often comes in the guise of a good man.

But I knew there was a battle

And strong resistance from his vessel

And the Father gave me words to speak to him.

The Lord has given us commandment

To trust in Him, with all our hearts,

To shun the works and the words and ways of man.

And if we’re true to His commandment

And men will have no power to make us stray away from Him.

Do We Thank God and Live?
In our losses we bore as we forsook all to follow the Lord, we were discovering that "a man's life does not consist in the abundance of that which he possesses." We were also learning about the sovereignty of God, how He is over all and engineers all things according to His will.
Walk by Faith
This is the first song I ever wrote as a believer in the Lord Jesus Christ...nothing default by any stretch but it amazes me how that we knew so much of what was required of us while yet babes in Christ. Twenty-one years later, I feel we have only been learning what we've known all along, that faith is the key and substance of our walk with God, that we must come away from all carnal thought and participation in order to walk with God by faith and be pleasing to Him.
The Flutterby (or) The Shadow of the Gallows Tree
Of all my writings, there are two that were written in 2 sittings, years apart. These were the first ones I ever wrote, and this one, interestingly enough, speaks of two births. While I had known the first, I had written of it but did not write of the second, which is the resurrection, until I had known it as well. It is therefore most befitting that the words of this writing came in two parts. The first part came only as a poem, words. It is all now a song though the music did come somewhere inbetween the two sittings.
Subscribe
Login or Register
You must login or register to comment
0 Comments
Inline Feedbacks
View all comments