On August 22nd, 2017, in our Moon River Estates home, I awoke having received the first 2 lines of this song. Later, at the computer, I began to amuse myself with the rest of the words, while Marilyn stood by thinking I was being silly. I was but I wasn’t. Words quickly and smoothly came forth to express the present theme of my life that was unfolding beyond my understanding. Call it inspiration.

Now, what about a tune? Would it take long, as it has with some other songs? I took up my guitar, went to D, then E, G, and A, timing the words with the chords.

I partly but naturally adopted a kind of nasal, aged voice by the spirit of the song, which Marilyn also had questions about but I loved it to tears and here it is. I call it Take Two, being accustomed to recording my songs, doing retakes, sometimes far more often than once. Here I was with lyrics suggesting I was having the privilege of a retake on life.

I must say I’ve had many regrets about the wrongs, failures, and foolish mistakes I’ve made in my life. I’m well aware that others have learned important things early in life, gathering wisdom and understanding in early age well beyond mine now in my seventies. I’ve wondered if there was such a thing as reincarnation after all and that I had a life or two to live before I attained to the understanding others have had almost out of the womb.

This song promises much to come and now upon me, for which I can only be excited and thankful. 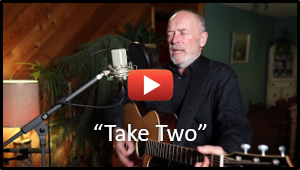