I was given this song while ministering to some men in the Prince Albert Correctional in 1976. I cried, and they cried. I felt for them and they with me. God only knows how this song affected them in time. 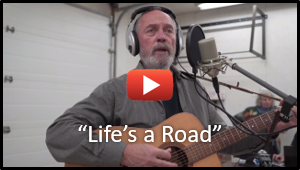 Life’s a road that is hard to travel when you’re lonesome;

Everybody just wants to do his own thing.

‘Cause when you’re through, you don’t know what the end will bring.

And that Friend will never let you down.

And at the end of that road you’ll have a crown.

Some people think they’ve gone too far and there’s no hope left.

Some say they’ve tried most everything to no avail,

But let me tell you friend, I know I’ve got the answer:

Only Jesus Christ can help you on life’s trail.

Now when you hear His voice and take His invitation,

He’ll tell you who you are and where you’re heading to,

And with peace that passes understanding too.

Crossroads
This song was written in Israel when a future friend, Paul Cohen, to whom the Lord sent us to speak was confronted with a major decision. This decision had major implications for him either way. He took the right road only to come to many crossroads since.
Up Is Down and Down Is Up
This satire is an expression of a time oft repeated wherein I felt incredulous and scornful of the thinking of so-called "theologians." They shape and size God, formulate the things they think He does, analyze Him, dissect Him, figure Him all out, put Him back together again according to their desires and tastes and put Him in a neat box, gift-wrapped and stamped, ready to be reproduced and mass-marketed to the ignorant masses the world over who swallow their doctrines as unsuspecting fish swallow bait, hook, line, sinker and rod. By the way, God hates the term "theology." How presumptuous is man that he should dare try to study God!
Flying
Who has not wanted to fly? Why do we have airplanes and stories like Peter Pan? Most of us have dreamt of flying by faith, that is, being airborne, powered by believing we could. Within, we can. God gives us that power in our relationship with Him whereby our spirits soar.