Twice in my life has the Lord enlightened me on this person in particular, once by revelation without the experience and the second time by a taste of what Job suffered, taking me back to my mother’s womb, my earthly origins. It is not our righteousness. 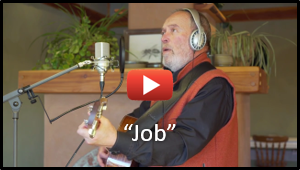 There once was a man in the land of Uz;

Perfect and upright was he;

He offered sacrifices for himself and his sons

And his daughters religiously.

One day the Lord saw He had to break a man;

He put the devil to the job you see.

The devil took his goods but wasn’t satisfied with that…

He also took his family.

And Job said, “Naked have I come from my mother’s womb,

Naked will I return;

The Lord did give and the Lord takes away;

Blessed be the Name of the Lord.”

Still the Lord saw He had to break a man;

And all Job had left was his wife.

The Lord sent the devil in to plaster Job with boils

But told him to spare his life.

And Job said, “Shall we receive good at the hand of God,

And shall we not receive evil too?

Though He slay me, yet will I trust in Him,

Yet I’ll maintain my own ways before Him.”

Days went by and Job was in a mess;

He couldn’t understand where he went wrong.

Then the Lord spoke to him and set his spirit straight

And Job began to sing a new song.

And Job said: “I have heard of You by the hearing of the ear

But now my eye sees You;

Now I abhor myself and repent in dust and ashes,

Blessed be the Name of the Lord.” (last line over)

The Victory of the Lord
There exists the notion that victory speaks only of joy, peace, love, rest in their counterfeit forms, the wishy-washy, mushy-gushy kind that has no place in reality. This song expresses the reality. There is war before victory. With war comes bloodshed, hard times, threatenings, loss and destruction, but the victory is there in real terms, earned and established by the Lord.
The Power of Jesus
While I called this song the above name 20 years ago, I would not do so now. The power of Jesus as the Pentecostal circles like to call it is nothing less than Christ in us, the hope of glory. His Spirit we receive not while seeking power but while seeking to do His will in reality and not as we perceive it.
There Is a Place
On September 24, 1996, Marilyn prophesied that the Lord was taking me, as He did Moses, for trespass, and that He had a ministry in the next world for me even as He had for Moses (as was seen on the mount of transfiguration). There came a resignation on my part, with sadness, and in this circumstance came this song which expresses that God does have a place reserved for saints. It is the destination of every believer, the goal of his spiritual trials and journey.