I knew a man by whom I met Judas Iscariot. Judas, I learned, was a glory seeker, one who wanted in on the best this world had to offer and who was prepared to betray any association to get what he wanted. Ironically, what he wanted was belonging, acceptance, social security. He lost it all or rather, lost all opportunity of gaining such because he never did have it. 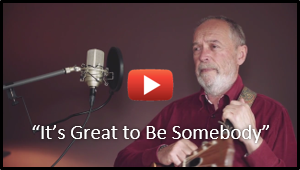 I’ve longed for the glory, and all in His Name.

But it’s great to be somebody because you’re nobody

We lust after good things; we want every gift;

We long for fulfillment, and all in His Name.

We want to do great things; we want to belong,

But it’s great to be somebody because you’re nobody

In sun or in shadow, in fame or seclusion,

In mountains or valleys, it matters no more,

When all that’s important is your life in Jesus,

It’s great to be somebody because you’re nobody

The Path of Truth
An exhilarating path it is but a lonely one. Each segment of this path brings its trials and troubles but also its rewards along with proof and assurance that any segment of it is more than worth the endeavour.
The Work of God
At a time of discouragement I received these words from the Lord in song and at this very moment as I write this introduction years later in 1996 ( the song was written in 1987), I feel down after having spoken to people who do not believe what I say or that the Lord has sent me to them. Yet I have nowhere but onward to go and am persuaded that these words hold true and someday will be fulfilled.
Got Nothin' to Live For, But Don't Wanna Die
The interesting thing about this song was that at the time it came to me, I had no thoughts, feelings, identification, circumstances, reason, or remembrance of the past to inspire the words; I just woke up and wrote them – no music, just words, if I recall correctly. I just laid the words aside, thinking no more of them until 2016, almost 6 years later. The words were a puzzle to me; I didn't know what to think of or do with them. They didn't express at all how I felt when I received them or when I returned to them years later – those days were long gone. But after I just happened to listen to a song or two by the late Amy Winehouse (not my usual custom by far), who impressed me with her unabashedness, freedom from self-consciousness or effort to sing creatively, I considered those words given me and put them to music. The spirit of the music seemed to be inspired by Amy, a troubled lady who was also crying for help but wasn't blessed to find it in this life. I wished I could have helped her. I then suddenly realized the song expressed exactly how I had felt in 1972 before I was converted. The song was a prequel to the time of newfound joy and freedom in Jesus Christ. Wow! I was thrilled at the realization. But for what purpose the song? I knew the song expressed how many, if not all, feel just before they meet the Lord. They're searching, troubled, lost, confounded, disoriented, not knowing up from down, sorrowful, without direction or purpose. It's a painful time -...