In Winnipeg, we met Henry Unrau, who laboured dreadfully under the Law, thinking he was doing God service. He was a tormented soul but a very self-righteous one who, while seeking counsel and help, quite believed that he was in a position of counseling and helping instead toward those who were not enslaved by service of the letter as was he. What ironies and contradictions in man! 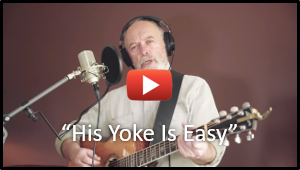 There are those who worship God

And try to do His will their way

Like a horse which the Master has not broke,

But when finally they see that the means are meant to be,

Then the duty will be done His way.

His commandments are not hard,

It’s delight to do His will;

His yoke is easy and His burden light.

We know that truth will make us free

And the joy of the Lord is our strength.

Substitutions He won’t have,

Those are not the things He wants;

We must learn to do exactly as He asks.

We have no wisdom in ourselves to decide the right from wrong;

We must hear Him tell us what and even how.

There is purpose everywhere

In all the smallest things He does

And though our understanding can’t see this,

And if we do that we just can’t miss.

I Want You to Know
On May 9th, 2017, while my wife Marilyn was away, the Lord gave me a new song I began to sing as I stood in our vacant, closed, echoing garage in Moon River. I felt a thrill in my soul and began with a bar or two of a pattern as in C, Em, F, and G. I searched for words. The only words coming at the time were, “I want you to know that, know that, I want you to know that….” From there I searched for more and came to, “…the greatest blessing, the greatest blessing….” From there to, “The greatest blessing is to know Him….” As days went by, I'd go on to other things but would return to search for more of the tune and words that were life and reality, not religious platitudes. I was inspired to sing from the heart and not from indoctrination or intellectual knowledge. I Want You to Know is one song I've had to search within for the tune and words. It's also the one I've most enjoyed. It's been like going deeper in mining for gold and by God's grace, striking “pay dirt.” I speak of the theme, words, tune, the level of notes and form of words more suited for my voice and range, and the pleasure I've enjoyed in the Lord. This is my most personal song. The theme certainly is the message of my heart. I came to realize this song is a Declaration of the First and Great Commandment.
Do We Thank God and Live?
In our losses we bore as we forsook all to follow the Lord, we were discovering that "a man's life does not consist in the abundance of that which he possesses." We were also learning about the sovereignty of God, how He is over all and engineers all things according to His will.
The Flutterby (or) The Shadow of the Gallows Tree
Of all my writings, there are two that were written in 2 sittings, years apart. These were the first ones I ever wrote, and this one, interestingly enough, speaks of two births. While I had known the first, I had written of it but did not write of the second, which is the resurrection, until I had known it as well. It is therefore most befitting that the words of this writing came in two parts. The first part came only as a poem, words. It is all now a song though the music did come somewhere inbetween the two sittings.