Deeper and deeper the Lord took us in Him. Now were we seeing good in evil and evil in good, that is, whereas we once thought we knew the difference, now we began to see more clearly. That which we thought was holy was otherwise, both within and without, and that which we thought was wrong was not always so. Needless to say, such experience brings its own torment but God brought us through and delivered us from evil. 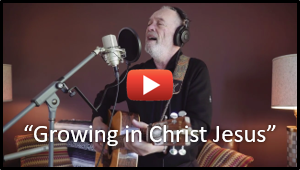 That is the question

That’s often on my mind

And sometimes gives me torment.

Clouds and smoke may look the same

But they’re so very different.

I must not speak in vain

But say what I’m supposed to say.

The Lord is Lord of all;

With that no one can argue.

Unless we look to Him,

Then, pointing to ourselves,

We seem to be His servants

But He alone can tell.

What was once the thing to do,

He’ll no longer wink at.

What was once so wrong,

Now we grow right into.

And with no change we die,

But if we change we hurt

And pain is the fruit of growing

Until we come to the fullness

In Christ Jesus our Lord.

Flying
Who has not wanted to fly? Why do we have airplanes and stories like Peter Pan? Most of us have dreamt of flying by faith, that is, being airborne, powered by believing we could. Within, we can. God gives us that power in our relationship with Him whereby our spirits soar.
It's Great to Be Somebody
I knew a man by whom I met Judas Iscariot. Judas, I learned, was a glory seeker, one who wanted in on the best this world had to offer and who was prepared to betray any association to get what he wanted. Ironically, what he wanted was belonging, acceptance, social security. He lost it all or rather, lost all opportunity of gaining such because he never did have it.
The Power of Jesus
While I called this song the above name 20 years ago, I would not do so now. The power of Jesus as the Pentecostal circles like to call it is nothing less than Christ in us, the hope of glory. His Spirit we receive not while seeking power but while seeking to do His will in reality and not as we perceive it.