Who has not wanted to fly? Why do we have airplanes and stories like Peter Pan? Most of us have dreamt of flying by faith, that is, being airborne, powered by believing we could. Within, we can. God gives us that power in our relationship with Him whereby our spirits soar. 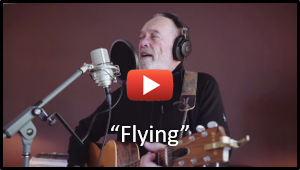 For the first time I am flying!

It’s what I’ve always dreamed of…

What I’ve always longed for!

Now I really have it…

A worm I am in blossom!

Flutterby, away up high

Up in the sky…

I am now an eagle

In the heights of Heaven

I can soar forever and ever and a day

Yes, I am flying.

There Is a Place
On September 24, 1996, Marilyn prophesied that the Lord was taking me, as He did Moses, for trespass, and that He had a ministry in the next world for me even as He had for Moses (as was seen on the mount of transfiguration). There came a resignation on my part, with sadness, and in this circumstance came this song which expresses that God does have a place reserved for saints. It is the destination of every believer, the goal of his spiritual trials and journey.
Up Is Down and Down Is Up
This satire is an expression of a time oft repeated wherein I felt incredulous and scornful of the thinking of so-called "theologians." They shape and size God, formulate the things they think He does, analyze Him, dissect Him, figure Him all out, put Him back together again according to their desires and tastes and put Him in a neat box, gift-wrapped and stamped, ready to be reproduced and mass-marketed to the ignorant masses the world over who swallow their doctrines as unsuspecting fish swallow bait, hook, line, sinker and rod. By the way, God hates the term "theology." How presumptuous is man that he should dare try to study God!
Do We Thank God and Live?
In our losses we bore as we forsook all to follow the Lord, we were discovering that "a man's life does not consist in the abundance of that which he possesses." We were also learning about the sovereignty of God, how He is over all and engineers all things according to His will.