It seemed we were saying farewell to all things of our past, not just human friends or acquaintances. It also seemed I was prophesying a parting in the future but which would come to an end, never to happen again. 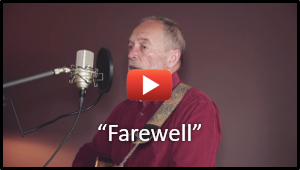 Praise be to God, we have tomorrows.

There’ll come a day when there’s no parting;

We’ll be together and with the Lord…

We must go on to higher places,

To better things, to wider spaces.

We mustn’t stop and turn around

For our reward to come is bound.

The Work of God
At a time of discouragement I received these words from the Lord in song and at this very moment as I write this introduction years later in 1996 ( the song was written in 1987), I feel down after having spoken to people who do not believe what I say or that the Lord has sent me to them. Yet I have nowhere but onward to go and am persuaded that these words hold true and someday will be fulfilled.
The Flutterby (or) The Shadow of the Gallows Tree
Of all my writings, there are two that were written in 2 sittings, years apart. These were the first ones I ever wrote, and this one, interestingly enough, speaks of two births. While I had known the first, I had written of it but did not write of the second, which is the resurrection, until I had known it as well. It is therefore most befitting that the words of this writing came in two parts. The first part came only as a poem, words. It is all now a song though the music did come somewhere inbetween the two sittings.
Got Nothin' to Live For, But Don't Wanna Die
The interesting thing about this song was that at the time it came to me, I had no thoughts, feelings, identification, circumstances, reason, or remembrance of the past to inspire the words; I just woke up and wrote them – no music, just words, if I recall correctly. I just laid the words aside, thinking no more of them until 2016, almost 6 years later. The words were a puzzle to me; I didn't know what to think of or do with them. They didn't express at all how I felt when I received them or when I returned to them years later – those days were long gone. But after I just happened to listen to a song or two by the late Amy Winehouse (not my usual custom by far), who impressed me with her unabashedness, freedom from self-consciousness or effort to sing creatively, I considered those words given me and put them to music. The spirit of the music seemed to be inspired by Amy, a troubled lady who was also crying for help but wasn't blessed to find it in this life. I wished I could have helped her. I then suddenly realized the song expressed exactly how I had felt in 1972 before I was converted. The song was a prequel to the time of newfound joy and freedom in Jesus Christ. Wow! I was thrilled at the realization. But for what purpose the song? I knew the song expressed how many, if not all, feel just before they meet the Lord. They're searching, troubled, lost, confounded, disoriented, not knowing up from down, sorrowful, without direction or purpose. It's a painful time -...