In December of 2010, there came a call to lay down the life for another. There was no one else to do it, and it didn’t matter; the duty and appointment were ours alone.

It appeared this person’s life was on the line. He was suspected and accused of, condemned, and hunted for, alleged horrific crimes in his country far away and many years ago. In my contemplation of these matters, realizing we could lose everything, a tune came to me in the middle of the night of January 30/31, 2011, followed by these words (Unfortunately, I don’t recall the tune). 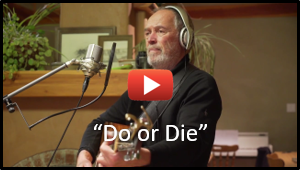 To stand in truth or to tell the lie;

To set aside your ice cream and pie.

The time has now come to do or die… (REPEAT)

2) They won’t know whether to laugh or cry;

Insisting the truth will never fly;

They’ll roll their eyes and heave a sigh,

Not knowing whether to laugh or cry… (REPEAT)

There comes a time when it’s do or die,

To stand in truth or to tell the lie;

To set aside your ice cream and pie.

The time has now come to do or die…

The time has now come to do or die.

3) From telling the truth we must never shy,

Though knees may knock and mouth goes dry,

“You need to cave!” by-standers will cry.

Which now will you do – tell the truth or lie…(REPEAT)

4) Only by blood will the truth be shared,

Truth goes to the gallows so others are spared,

We live because An-other has cared,

For speaking the truth, we must be prepared…(REPEAT)

5) Some day all truth will come to light

Nothing hid from any man’s sight,

Will we have done the wrong or the right?

Will our days a-head be dark or bright…(REPEAT)

There's Lots to Be Thankful For
At a time of uprooting and forsaking all once again, my wife was finding it difficult and this song came then. It held the promise of better things ahead as we had always experienced in similar times before. Encouraged, we plodded on.
A Deadly Pull
I think that one of the greatest battles I have ever had has been to forsake family and more particularly my parents, and perhaps most particularly, my father. His draw on my heart was so powerful, so very powerful. In his last years, his state was so pitiable that it was very hard for me to refuse him any wishes. It was agonizing indeed. But he died and was buried on my birthday, April 1, 1985. His death was the morning after I received a vision of the Lord standing up to put a stop to the enemies who were tormenting me. I did not know anything of my father's death until the following morning, or that his death and the vision were related. In his death, I felt loosened, with new freedom and power.
The Very Best
Simple and self-explanatory.