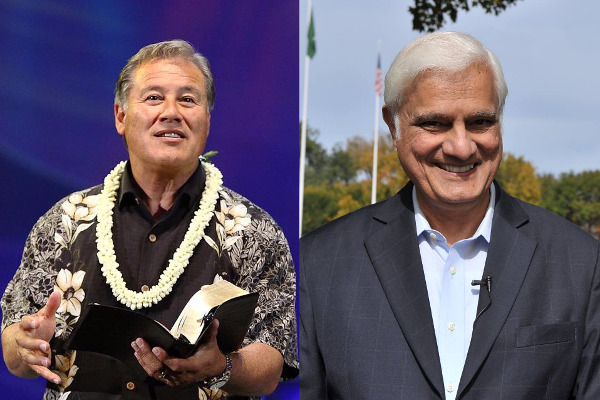 False teachers who preach Jesus Christ don’t resemble Him at all. They may talk about Him, but they look like the world, appealing to its credentials and ways in order to attract converts and followers. It’s a twisted bait and switch where you get what you want, but not what you need.

We were asked to evaluate two popular preachers:

Could you please comment on two well known Christian Teachers, and your opinion on their being false teachers or not? I am referring to Ravi Zacharias, and Wayne Cordeiro.

Thank you, and may God Bless your ministry.

Ravi Zacharias and Wayne Cordeiro are not men of God.

Here’s a sample from Wayne Cordeiro: Pastor Wayne Cordeiro on Family. In this video, he says the true priorities of life are God (he got the first one right), then spouse, children, and vocation – in that order. Is that necessarily true? In earthly terms, perhaps, but what if God calls one to ministry as his vocation? When Jesus Christ calls a man to the work of the Kingdom, that calling comes before spouse and children, does it not?

That said, I think Wayne means his family comes before his job, if a secular, income-earning occupation, so I concede there. Even so, isn’t it God Who must decide what or who comes first? And isn’t it true that every believer is called to forsake everything to follow Him, even as Jesus declared?

“So likewise, whosoever he be of you that forsakes not all that he has, he cannot be My disciple” (Luke 14:33 KJV).

See Choose This Day Between Family and God.

In the video, Cordeiro is highly recommended by Rick Warren (The Purpose Driven Life: Promoting Christianity Without Christ). Rick, as you can see at our link, is a false teacher. Shall false teachers recommend the true? Not while the true are living:

Matthew 23:29-31 MKJV
(29) “Woe to you, scribes and Pharisees, hypocrites! Because you build the tombs of the prophets, and decorate the tombs of the righteous,
(30) and say, ‘If we had been in the days of our fathers, we would not have been partakers with them in the blood of the prophets.’
(31) Therefore you are witnesses to yourselves, that you are the sons of those who killed the prophets.”

Cordeiro and Warren preach another gospel; it’s all about the social graces and etiquette the world practices at the cost of truth. There is no cross whatsoever involved. The Message or Gospel of God and His Kingdom begins with the cross, calling one to repentance and confession of sin by His standards and ways.

Zacharias, Cordeiro, and Warren are loved by men; they are popular, commended, and promoted by the world. You see that Ravi Zacharias had the title of “Doctor.” Who gave him that title? Was it Jesus Christ? Did Jesus call His disciples “Dr. Simon Barjona,” “Dr. John the son of Zebedee,” and “Dr. Paul of Tarsus”? Did Paul call his disciple Timothy “Reverend Tim”?

Did even the Lord Himself carry a title?

“The Jewish leaders were amazed and said, ‘How did this man learn so much? He never had the kind of teaching we had!’” (John 7:15 ERV)

Jesus had no degrees or doctorates. Why? Because God was demonstrating that the Kingdom of God is not of this world – it doesn’t come through excellence of body or mind, skill, education, or training in achieving the praise and honor of men.

1 Corinthians 1:25-31 MKJV
(25) Because the foolish thing of God is wiser than men, and the weak thing of God is stronger than men.
(26) For you see your calling, brothers, that not many wise men according to the flesh are called, not many mighty, not many noble.
(27) But God has chosen the foolish things of the world to confound the wise; and God has chosen the weak things of the world to confound the things which are mighty;
(28) and God has chosen the base things of the world, and things which are despised, and things which are not, in order to bring to nothing things that are;
(29) so that no flesh should glory in His presence.
(30) But of Him you are in Christ Jesus, Who of God is made to us wisdom and righteousness and sanctification and redemption;
(31) so that, according as it is written, “He who glories, let him glory in the Lord.”

“I have come in My Father’s Name, and you do not receive Me. If another shall come in his own name, him you will receive. How can you believe, you who receive honor from one another and do not seek the honor that comes from God only?” (John 5:43-44 MKJV)

Don’t these men come in excellency of speech? What does the apostle Paul say of this?

1 Corinthians 2:1-5 MKJV
(1) And I, brothers, when I came to you, did not come with excellency of speech or of wisdom, declaring to you the testimony of God.
(2) For I determined not to know anything among you except Jesus Christ and Him crucified.
(3) And I was with you in weakness and in fear, and in much trembling.
(4) And my speech and my preaching was not with enticing words of man’s wisdom, but in demonstration of the Spirit and of power,
(5) so that your faith should not stand in the wisdom of men, but in the power of God.

These men have the mark of the beast so that they are free to buy and sell, received and admired by the world. And what does Jesus say about that?

“And being money-lovers, all the Pharisees also heard all these things. And they derided Him. And He said to them, ‘You are those who justify yourselves before men, but God knows your hearts. For that which is highly esteemed among men is abomination in the sight of God’” (Luke 16:14-15 MKJV).

Read all of the Diabolical Doctrines and The True Marks of a Cult. In these writings you’ll find a multitude of indicators warning you of things not right with these men. If you have any questions after reading, let us know.

Not only has Ravi Zacharias promoted himself as a man of God using the worldly title, “Doctor,” in total contradiction to the Word of God and His ways, but it has now been brought to our attention that Ravi has even lied about his earthly credentials.

Here’s a video with a one minute overview of this fiasco:

So when Ravi and his team were confronted on the matter, they tidied up his website and hid his transgression rather than openly confessing the sin. What lying scoundrels! The Lord Jesus Christ says the following words to such as Ravi and his confederates:

“Woe to you, scribes and Pharisees, hypocrites! For you are like whitewashed tombs, which indeed appear beautiful outside, but inside they are full of dead men’s bones, and of all uncleanness. Even so you also appear righteous to men outwardly, but inside you are full of hypocrisy and iniquity” (Matthew 23:27-28 MKJV).

Or how about in the modern vernacular?

“You’re hopeless, you religion scholars and Pharisees! Frauds! You’re like manicured grave plots, grass clipped and the flowers bright, but six feet down it’s all rotting bones and worm-eaten flesh. People look at you and think you’re saints, but beneath the skin you’re total frauds” (Matthew 23:27-28 MSG).

A more detailed video report (15 plus minutes), “Lying for Lord or Self?” – can be seen here: