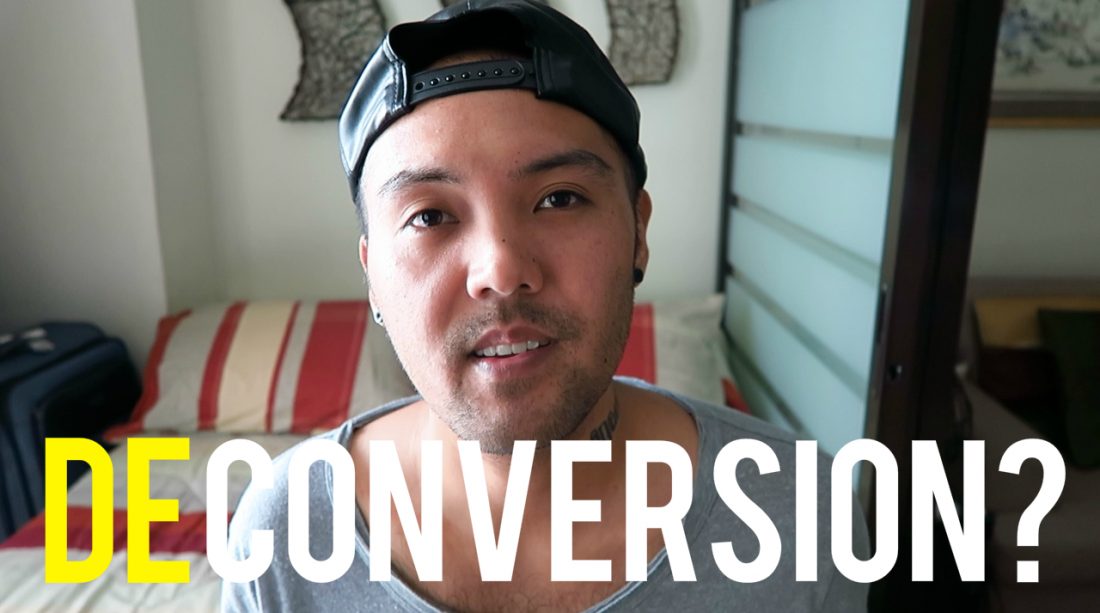 Joshua Tongol says he is no longer a Christian. He speaks of false Christianity, the kind he was raised with from birth. Now he peddles podcasts and writings as “A Fresh Voice for Modern-Day Spirituality,” sans the name of Christ. It’s all Tongol, just as it was before, only the delusional ruse of it being about the Lord Jesus Christ is over.

We received the following email from a visitor at The Path of Truth. Deborah had red our paper on Joshua Tongol and wanted to pass along a recent Youtube video she found of him titled “Why I’m No Longer a Christian”.

I have recently found your website and boy, am I glad I did. That is a completely different story, though.

I am writing because as I was looking over your list of false teachers, I saw that you had Joshua Tongol listed. I found this very interesting as I recently came across his youtube video stating he was no longer a Christian. He has a couple of follow ups explaining that YES, he really was a believer and he really did ask Jesus into his heart, but now he no longer believes.

Anyway, you may well already know, but just in case, here’s the link to the one I came across.

Thank you and God Bless you!

Good to hear from you, Deborah. Thanks for sharing the update about Joshua Tongol leaving “Christianity.” We hadn’t heard the news, but it isn’t a total surprise, given that Joshua never knew the King of Glory, the Lord Jesus Christ.

This is a very positive development from the standpoint of Truth. Now that Joshua has been stripped of using the Lord’s Name to vaunt himself, he is much more transparent about posing as his own god. This usurpation of the Lord’s rightful position will also fail.

In the end, Joshua Tongol will truly confess, for the first time, that Jesus Christ is Lord, and will bow before Him. Darkness isn’t the Omega – the Lord Jesus Christ is. The Light of God, His Word and Truth, prevails; bless the Lord!

Joshua’s website leaves no doubt that he believes he has the answer to life without Jesus Christ. At the top of his site he advertises his book:

THE SECRET TO AWESOMENESS
creating the Life you’ve always wanted

In a video on his site (https://joshuatongol.com/former-christian-life/), Joshua says he was a Christian all his life. “I was born into this stuff, this faith, this mindset of Christianity” he says. “I don’t remember a time when I didn’t believe. I’ve always believed… My entire life I believed I communicated with Jesus and I was building that relationship, that intimate relationship with Jesus where I would talk to Him all throughout the day.”

Joshua, however, never heard from God, even though he eventually presumed to teach people “how to hear God’s voice and build intimacy with the Father.” All he can refer to in the video is his indoctrination and religious experiences that are common in nominal Christianity, without conviction or demonstration of an actual relationship with God. There’s only religious doctrine, technique, and practice. The Person of Jesus Christ is absent altogether. He never said or revealed anything to Joshua. And that’s why Joshua gives Him no credit or acknowledgement. Jesus was never anywhere to be found, and truly wasn’t sought after, because if that was the case He would have been found.

“And you shall seek Me and find Me, when you search for Me with all your heart” (Jeremiah 29:13 MKJV).

Romans 10:6-11 WEB
(6) But the righteousness which is of faith says this, “Don’t say in your heart, ‘Who will ascend into heaven?’ (that is, to bring Christ down);
(7) or, ‘Who will descend into the abyss?’ (that is, to bring Christ up from the dead.)”
(8) But what does it say? “The word is near you, in your mouth, and in your heart;” that is, the word of faith, which we preach:
(9) that if you will confess with your mouth that Jesus is Lord, and believe in your heart that God raised Him from the dead, you will be saved.
(10) For with the heart, one believes unto righteousness; and with the mouth confession is made unto salvation.
(11) For the Scripture says, “Whoever believes in Him will not be disappointed.”

Clearly Joshua has been disappointed. Do we condemn him for this? Not at all. His unbelief condemns him.

We don’t deny that Joshua had spiritual experiences during his “ministry” days, as he complains about others who now criticize his change of approach. Satan is a spirit, after all, who comes as an angel of light. It’s not strange or unexpected for there to be signs and wonders such as Joshua experienced in his “Christian” life.

“For false christs and false prophets will be raised, and they will give miraculous signs and wonders in order to lead astray, if possible, even the elect” (Mark 13:22 LITV).

Joshua says that the common nominal Christian notion of “being saved doesn’t make sense, of you having to believe X, Y, and Z, and then you’ll be able to reap these benefits… I feel like it’s out of touch with reality.” He’s right. But because the answer isn’t found in formula, doctrine, and religious practices doesn’t mean the One Whose Name is attached to those things isn’t the Answer. The Lord Jesus Christ is, and always has been, the Answer.

I was going to say that Joshua has thrown out the Baby with the bathwater, but in a way that’s not true. He never had the Lord in the first place that he could throw Him out now. All Josh is doing is shedding the false religion he was born into, which can be a great relief and positive change. But the current road Josh is on and touts to others on his site, “creating the life you always wanted,” is another dead end. The wisdom of God puts it this way:

“You shall walk after the LORD your God and fear Him, and keep His commandments, and obey His voice, and you shall serve Him and hold fast to Him” (Deuteronomy 13:4 MKJV).

With his new orientation, Tongol again arrogantly thinks he knows what is true and is qualified to teach others. However, there were never more apt people than Tongol and his followers for whom these Words of the Lord apply:

“Every plant which My heavenly Father has not planted shall be rooted up. Let them alone. They are blind leaders of the blind. And if the blind lead the blind, both shall fall into the ditch” (Matthew 15:13-14 MKJV).

“Let us hear the conclusion of the whole matter. Fear God, and keep His commandments. For this is the whole duty of man. For God shall bring every work into judgment, with every secret thing, whether it is good, or whether evil” (Ecclesiastes 12:13-14 MKJV).

Paul Cooper: I Am God

Without faith in, and obedience to the Lord Jesus Christ, men act as their own gods. Trying to cope with the evil fallout of their independence from God, some will even double down and try to exercise power and control as if they are Almighty God. Tasting some “success” with a proactive and positive attitude, they then set themselves up as teachers and lead others into destruction.

Making Friends with the World

Joshua Tongol is a hip young preacher with sincerity and enthusiasm for “superabounding grace,” which is, in reality, a false gospel that leaves out the crucial elements of faith and obedience through the cross. That’s where one finds the grace of God in Christ, not in our own hearts or ability to love, as Joshua teaches. He is putting his own name in lights, not glorifying the Light of all men.

One in agreement with Joshua Tongol tries to explain her spiritual philosophy that is in harmony with his, which is basically that we need to focus on “grace” and not on what God requires of us. But we discovered the true grace of God in Christ only when we focused on what He required of us, and how the lawless hate to hear that!