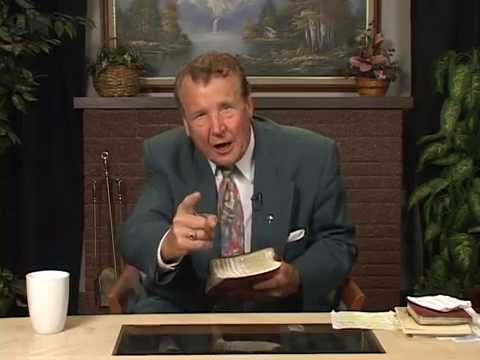 Max Solbrekken has presumed to be the greatest, if not the only, evangelist Canada has ever produced. He is neither; and he doesn’t even have the “honor” of being the only false evangelist from Canada. Not that Canada should be blamed for such fruit. Men who name their ministries after themselves and put themselves in the spotlight are liars and thieves, every last one of them. Men who call their works after the abominable and devastating Crusades of the Catholic Church are not only liars and thieves, but murderers. Men who wear clerical collars are pretentious “ministers” of God, carnal in all respects. Men who call themselves “Reverend” are usurpers of the glory of God. Max is another false gospel-mongering soul-breaker whose end is just in God’s sight.

We attended a Max Solbrekken meeting in the late ’70s. He is pretentious; he is a phony like so many others. We listened to what he had to say, which was not much. Many of these men speak of the work they are doing and for which they need money. They want God to provide, yet they ask you to do what they want God to do.

In his pitch for donations (which was almost all of the meeting), we got up and left. As we were exiting, he spoke up and said to all, “There you go. When people are asked to dig into their pockets, you find out pretty quick what their god is!” I stopped for a moment, wondering what to say. I had nothing to say, and we left.

When we got outside, we found the door of our Volkswagen kicked in. I wondered if God was punishing me because I had not given money to Max but that thought quickly disappeared. We knew Solbrekken was a false evangelist. When we got home, I took the door panel off, pushed out the dent and it was as good as new in a matter of minutes.

Watching TV years later, there was a panel of ministers discussing abortion. There had been an event scheduled by abortionists for Mother’s Day. Max spoke up in his religious manner, decrying the fact that they should promote abortion on such a day.

As if that were the issue! Does it really matter what day one murders or steals or commits adultery? And obviously, Max does not know that the institutions of this world, such as Christmas and Mother’s Day, are not of God’s making. So why does he, presumably a minister of God, glorify these events? Is it not because he is not a minister of God?

This is a firsthand experience we had with Solbrekken, not to mention the general falsehood he practices and represents of orthodox Christianity. Read Diabolical Doctrines, The True Marks of a Cult, Is Your Profession of Faith Vain, Christian? and more.

More on this false teacher:

Those who believe in Jesus Christ feed off of His flesh and blood, while the religious who seek their own fame and glory will feed on any vile lie they can find, if it serves their purposes. Here we see how Max Solbrekken went bottom-feeding and got caught in a trap, exposing himself as a liar and false teacher, again.