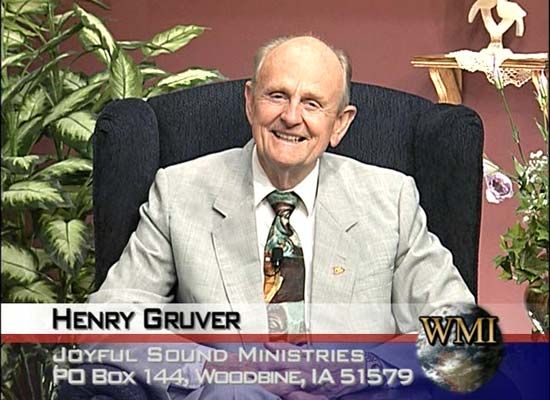 Utter Confidence in the Flesh

False teachers are show-offs seeking attention because they love men’s praise and think very highly of themselves. They haven’t met the Highest One Who took on the form of a servant, the Lord Jesus Christ. As He said, “How can you believe, you who receive honor from one another and do not seek the honor that comes from God only?” (John 5:44 MKJV) Henry Gruver shows how, if you’re not seeking the honor that comes from God alone, you can fall for anything.

A woman in touch with us wrote:

Also, Paul, I’m slow on prison letters, but yesterday received one from a man who is actively involved with the Church prison and recently became their minister. I have warned him in the past of Calvinism as he had stated to proclaim to be one. Now he has sent me some info of Henry Gruver. I looked him up, didn’t see much on his site. I have never heard of him. But somehow he is in the prison either by materials or someone else? Billy, the now minister has grown in the Lord this past year which is joyful. Do you have any knowledge of Gruver?

Hi Deborah, and thank you for the report. It’s good to share in your enthusiasm.

I listened to Henry Gruver speaking at The Prophecy Club: http://wmcgrew.blogspot.ca/2013/02/how-to-commune-with-god-by-henry-gruver.html. This is not a man of God or a man of prayer as he claims to be and as he is sold by Stan Johnson. He is a man who loves to show off prayer in public. He is a long-winded hot bag of air, utterly confident in the flesh, who has nothing to do with the Father he boasts of loving so much. He is pretentious and condescending to a degree I haven’t seen in some time.

There it is; now you know. I have no doubt there could be much more said as I spend more time observing, but I really have had enough of him and need to make better use of my time.

Thank you for your letters, and it’s good you ask about these things.

As I watched Stan Johnson introduce Henry Gruver and as I watched Henry Gruver begin to speak, I discerned that their ways were plainly revolting to the angels, saints, and God of Heaven. Think of these simple elements, not to mention the subject matter of Gruver’s sermon, of which so much could be said:

Stan Johnson praises Henry Gruver as “one of the most anointed men of God [he] had ever met,” and then gives him the usual worldly introduction practiced by men of flesh on those notable among men of flesh.

Henry thanks Stan and calls Stan’s introduction “lovely,” as he steps on stage with shirt, tie, and white suit. John the Immerser could have taken a few lessons in grooming and social etiquette from this mighty man of prayer (I speak tongue-in-cheek). But then John wasn’t a man pleaser as is this smooth fellow, this “Dapper Dan,” this man in shining armor from whom we are all to learn how to pray and have fellowship with God.

Did God really say to Stan Johnson of Gruver, “Henry and I have walked a long ways together”? Does God speak that way of any man? I don’t think so.

Then comes applause from the audience that is called to repent and worship the Lord. Are men of God and prayer desirous of applause? Would they even allow it? And just who do the people think they’re dealing with? Could it be that instinctively, the pleasure-seeking crowd knows that Henry’s not sent of God? Either that or they simply don’t understand the nature of a true man of God because they don’t know what it means to walk with God themselves.

Gruver speaks of “falling in love” with God. That is a term man uses that testifies of a worldly love that is in direct and intense antipathy with God, as indicated, for example, when Peter reproached Jesus Christ for speaking of His imminent death in Jerusalem. He spoke out of his “love,” and Jesus answered him, “Get behind Me, Satan….”

Gruver boasts about “being in love” with Jesus. Have you ever noticed how absent in the Scriptures such an expression is? That’s because the Bible testifies of another kind of love altogether. Yes, Jesus spoke of loving His disciples; John was referred to as the disciple whom Jesus loved, and we know God so loved the world that He gave His Only Begotten Son, but the only example I can think of where a man speaks of loving God is where Jesus, after His resurrection, confronted Peter three times on whether Peter loved him. Peter answered three times that he did, and Jesus gave him a commandment to feed His sheep if he did love Him. Is there a connection in this incident to Peter’s previous three denials of Jesus?

Is there another example? Perhaps, but none comes to mind. In that latter case, Jesus was making a point and eliciting a response from Peter.

See, God’s love is not man’s love, and man’s true spiritual love of God transcends the terms in which Henry Gruver speaks. When we read the Bible, we find so much more testimony about how God loves us than about our loving Him. And His love is so different from man’s.

Paul adds this about Gruver:

Henry Gruver makes a name for himself with some very sensational prophecies about Russia invading the United States (see http://americaslastdays.blogspot.com/p/henry-gruver-russian-invasion-of-america.html). Of course, none of these prophecies have been fulfilled, because they’re fantastic lies (doesn’t matter whether they’re intentional).

During Gruver’s adult life, Russia (the Soviet Union) was the 800 lb. gorilla threat to world peace in conflict with the Western democratic nations. They armed themselves to the teeth and fomented Communist revolution wherever possible. So Gruver’s imaginative reaction to this threat is natural and understandable. People everywhere feared some form of all-out war and nuclear holocaust. The Lord, however, gave Victor words assuring otherwise during the height of the Cold War between the United States and the Soviet Union.

Here’s his account from wHaT tHe LoRd HaS dOnE wItH mE:

Particle – Downfall of the Superpowers

We were watching a newscast one day when Art said, waving his index finger as he was wont to do, “There’s going to be a nuclear war for sure between the USSR and America.”

I immediately received a Word from the Lord: “The superpowers will be brought down from within.”

I took this Word to mean that we wouldn’t see the USA and the USSR destroy each other with their nuclear arsenals, which was a comforting thought; nonetheless, they would be coming down. [end]

That also means an invasion or external war wouldn’t be bringing down these respective empires. Indeed, the Soviet Union came down as it collapsed under the weight of its own corruption in 1989, and the same thing is happening to the United States. America is weak and confounded, because rotting and collapsing from within.

Gruver externalizes the threat because he’s a man pleaser who can’t directly confront people on their sins. He hasn’t yet confronted his own. True men of God come to sound the alarm, giving notice that YOU are the issue and the enemy of peace, not the Russians or Muslims or Chinese or anyone or anything else external. The Kingdom of God comes from within, supplanting the kingdom of Satan. This is where salvation takes place. Satan’s ministers create a lot of hoopla, focusing on externals, and remain in bondage along with their followers.

For more on Gruver’s and other false teachers’ errors and misleading directions, see The True Marks of a Cult and Diabolical Doctrines.