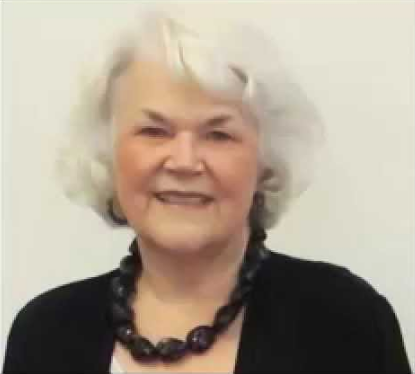 How self-confident and presumptuous are those men and women who think they’re serving God in ministries they’ve made up to glorify themselves! Woe to them, and woe to those who follow them!

Paul began receiving newsletters from an online ministry, Abiding Life Ministries, with Geri McGhee as the contact. Here is what the website says about her organization:

Abiding Life Ministries is a nonprofit organization existing solely for the building of God’s kingdom through preaching the gospel, healing the sick, casting out demons, and the writing and publishing of books and pamphlets.

Abiding Life Ministries was founded in 1978 by Bob McGhee, the late husband of Geri McGhee. It presently consists of a volunteer staff and secretary, and various churches and ministries who partner with Abiding Life to host seminars and conferences across the United States. Geri McGhee travels with her team and singly, teaching “Overcoming Life’s Obstacles Seminars,” in churches and conferences across the globe as God permits.

Abiding Life Ministries’ vision is to be one of God’s instruments to heal, deliver, train, and disciple leaders through teaching principles of the “overcoming life”. It is our prayer that these disciples are equipped to carry out Christ’s ministry here on earth for the building up of the Body.

Have you been reading at all on our site? www.ThePathofTruth.com

What do you think?

I haven’t had time to read it I’m sorry.

Paul unsubscribed from Geri’s newsletter (which was the usual religious fare without reality or life) and wrote back:

Since you started emailing me, I wondered if it was because you knew something about us, but it appears you had someone scouring the net for addresses. Whatever the case, Geri, it doesn’t matter. Here we are, by God’s design, and He has given us this website. Are you interested in what He has to say?

Having a place to start might help you. Try this:

Read a doctrine at a sitting, if you will.

No actually you emailed me first. When someone does that I feel they have been scanning the Internet so I add them to my email address. I don’t have time to scan the Internet as I am in full-time ministry. I noticed today that you unsubscribed from my email list and that is perfectly okay. I did not click into your link on diabolical doctrines. I already know more about the devil who will burn and be tormented in the lake of fire for eternity than I need to know. All I really need to know is to repent of my own personal sin and I have total authority over him and his demons when I use the name of Jesus which is the name above every name. At the name of Jesus every knee shall bow of those in heaven and earth and under the earth and every tongue shall confess that Jesus Christ is Lord to the glory of God the father!

Could you please send the email I first sent you, Geri? I have no record of it here, or can’t find it.

Geri then informed Paul that she had actually heard from him indirectly, being on a large carbon copy mailing list of another ministry to whose Christmas email Paul had replied:

Have you not heard the truth about Christmas?

That Devilish Spirit of Christmas

Paul then wrote to Geri:

Thanks for digging up the original email you responded to. I sent that reply to you and everyone on Anil’s carbon copy list because the subject matter was so important, especially for those calling themselves by the Name of Christ. Did you read the link? Are you aware of the devilish spirit of Christmas?

Which brings us to your other email about the Devil. You replied about Diabolical Doctrines:

“I did not click into your link on diabolical doctrines. I already know more about the devil who will burn and be tormented in the lake of fire for eternity than I need to know.”

You know nothing at all. If you did, you wouldn’t refuse good instruction from God, and you wouldn’t believe one of the most diabolical doctrines there is, never-ending torment. The Lord’s sacrifice was for the whole world under the power of Satan, and His victory is complete. God, not Satan or hell or death or the Lake of Fire, is the End, the “Z” of all things, paid for in His blood. You serve Satan with your evil doctrine.

Yet the Devil too, when his job is finished, will be reconciled and transformed by the Lord Jesus Christ. See Satan’s Redemption.

“All I really need to know is to repent of my own personal sin and I have total authority over him and his demons when I use the name of Jesus which is the name above every name.”

Wrong. Even if you had repented of all your sins, you still wouldn’t have total authority over Satan. Hear what the apostle John spoke from God:

It is not the newly forgiven who have overcome the evil one, but those who have continued in faith and complete the necessary battle with the man of sin within. And those who have overcome don’t command Satan according to their own will, but recognize God’s sovereignty and use of the Devil as His agent for evil where needed (as in Job 1 and 2).

You know and have nothing at all, Geri. And you’ll need to know and acknowledge the way things are before you will ever have anything from the Lord. You must be stripped of your fake authority and pretensions of ministry in Christ.

You walk in the presumption of the man of sin, just like these:

Acts 19:13-16 MKJV
(13) And certain from the strolling Jews, exorcists, undertook to name the Name of the Lord Jesus over those having evil spirits, saying, “We adjure you by Jesus whom Paul preaches.”
(14) And there were seven sons of Sceva, a Jewish chief priest, who did so.
(15) But answering, the evil spirit said, “Jesus I know, and I comprehend Paul, but who are you?”
(16) And the man in whom the evil spirit resided leaped on them, and overcoming them he was strong against them, so that they fled out of the house naked and wounded.

And don’t tell us you have power over evil spirits because you haven’t been attacked by anyone when you’ve attempted to cast them out. Those spirits are playing games with you, given the authority and mandate to do so from above as part of the strong delusion God has given you over to. You need repentance, prayer, and fasting.

If you had godly repentance, you would also know that women aren’t called to ministries exercising authority over men: Diabolical Doctrine: Women Are Ministers of God in Spiritual Authority over Men.

This is a hard letter for you to hear, impossible to receive except by God’s grace. Faith in, and acknowledgment of, the Truth, with obedience, is your only way of deliverance.

I have seen your devilish side as well as knowing the devilish side of Christmas without subjecting myself to your link. I don’t open links from strangers. I receive many emails daily and delete 90% of them because the majority of them (including yours) are not from God. Please find something more fruitful to do then wasting your time emailing me. I’m not interested in anything you have to say. I do forgive you for your meanness.

Paul wraps it up:

You answer as expected, Geri. “How hard it is for those who have riches [even make-believe riches] to enter the Kingdom of God!” (Luke 18:24)

Not that you care in the least about His Kingdom. You don’t even acknowledge what is right, much less aspire to it. You’re one of the “firsts” who shall be last. These emails are the sound of the Lord closing the door on you in His judgment.

Luke 13:25-30 MKJV
(25) “And once the Master of the house has risen up and has shut the door, and you begin to stand outside and to knock at the door, saying, ‘Lord, Lord, open to us,’ and He shall answer and say to you, ‘I do not know you; from where you are’;
(26) then you shall begin to say, ‘We ate and drank in Your presence, and You have taught in our streets.’
(27) But He shall say, ‘I tell you, I do not know you; from where you are. Depart from Me, all workers of unrighteousness!’
(28) There will be weeping and gnashing of teeth when you will see Abraham and Isaac and Jacob, and all the prophets, in the Kingdom of God, and yourselves being thrust out.
(29) And they will come from the east and the west, and from the north and the south, and will recline in the Kingdom of God.
(30) And behold, there are last ones which will be first, and there are first ones which will be last.”

It’s never a waste of time speaking the truth. Besides the fact that you’re being judged by the Word of God, the things I’ve written are going out to others who are listening and will be posted on our site for yet others to hear, Lord willing.

You mock the Lord with your pious forgiveness of my “meanness” for telling you the truth. Will you say the same to Him as He pours His wrath on you, Geri?