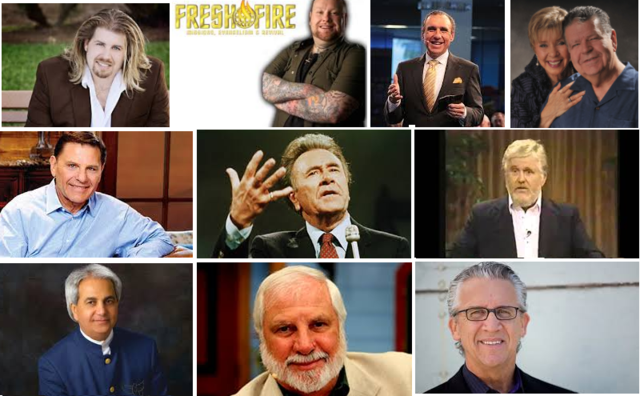 A Motley Crew of Demonic Mockers

“But evil men and seducers will go forward to worse, deceiving and being deceived” (2 Timothy 3:13 MKJV). All manias end with a blow-off phase where all sense is abandoned, because people are given over to their lusts entirely. So we know that we are nearing the end of evil men and seducers when they laugh like devils and call that the worship of God.

David Buckman, from Australia, sent us a brief video (no longer available) of Roy Fields on stage before a congregation in Lakeland, Florida.

Singing, wearing long beyond-shoulder-length hair, an ungodly and shameful thing for a man before God in itself (1 Corinthians 11:14), he leaned forward on a lectern and began an intermittent sordid laugh with a demonic scowl.

According to people like Todd Bentley, Rodney Howard Browne, John and Carol Arnott, Kenneth and Gloria Copeland, Oral Roberts, John Wimber, Benny Hinn, Bill Johnson, Rick Joyner, and their many ministering companions of like ilk, this laughter is “holy laughter,” the influence of the Holy Spirit of God.

This performance has nothing whatsoever to do with God. This brazen, foolish, ugly, grandstanding, exhibitionist, wicked, lawless, flagrant, taunting, scornful, mocking, demonic conduct and spirit is great effrontery to the Lord Jesus Christ, especially so when perpetrated in His Name.

Scorning his audience for being such naïve, damned fools, Roy Fields slowly falls backwards upon some stage equipment and onto the stage floor. A few members of his “ministry” crew rush over to help him. Fields lies there, under a spell or pretending to be “drunk in the Spirit.” Musicians continue to play their music in support of the performance.

The audience is entertained. Some stand up, smiling, laughing, clapping, and lifting and waving hands in a worship stance. Some dance, calling it “dancing in the Spirit.” “God is visiting us! Aren’t we blessed!” they think and exclaim.

“But the Spirit expressly says that in the latter times some shall depart from the faith, giving heed to seducing spirits and teachings of demons” (1 Timothy 4:1 MKJV).

Do these people know who is manifesting himself and whom they are worshipping? Most don’t, although some do know they’re worshipping Satan, not God. There are mockers who worship the Devil and know it, but pretend they are worshipping the Christian God, the Lord Jesus Christ. And they have gleeful sport with the silly suckers who call themselves saints, but who sloppily file into their pens as swine for the slaughter.

Was it not such wicked and idolatrous revelers as these that Moses commanded his Levitical brethren to slay, sparing none (Exodus 32)? Those idolaters were also in worship, professing, pretending, presuming to be worshipping the God Who, not many weeks earlier, led them out of Egyptian slavery by a mighty hand and great signs and wonders.

In His Name, they were worshipping the golden calf Aaron had fashioned for them at their request. So what’s the difference between them and Fields’ flock? Fields and his flock have never heard or known the Lord. Fields and the other leaders today aren’t Aarons mistakenly leading the people. These leaders are wicked charlatans, demon-possessed entertainers, tickling ears, worshipping mammon and stardom, deceiving and raping the public, and lusting souls love to have it so.

“For a time will be when they will not endure sound doctrine, but they will heap up teachers to themselves according to their own lusts, tickling the ear. And they will turn away their ears from the truth and will be turned to myths” (2 Timothy 4:3-4 MKJV).

That time has come. How depraved are the Americas! How degenerate! How polluted! How deceived! And when we speak up against this astonishing depravity, people condemn us for judging! They believe, follow, and devoutly, indignantly defend swine herders, who feed them vile spiritual slops and then slaughter them for their bacon. How sad! How tragic!

All those who follow and revel with such men are not the LORD’s sheep. Jesus says so:

“And when He puts forth His own sheep, He goes before them, and the sheep follow Him. For they know His voice. And they will not follow a stranger, but will flee from him, for they do not know the voice of strangers” (John 10:4-5 MKJV).

All such revelers who read here, take heed; beware, your destruction is upon you and you will not escape. If it so happens that God has touched you and you can hear our voice, run for your lives. Don’t wait; don’t hesitate, not for a moment. Leave everything behind:

Matthew 24:15-18 MKJV
(15) Therefore when you see the abomination of desolation, spoken of by Daniel the prophet, stand in the holy place (whoever reads, let him understand).
(16) Then let those in Judea flee into the mountains.
(17) Let him on the housetop not come down to take anything out of his house;
(18) nor let him in the field turn back to take his clothes.

You haven’t come to our site by accident. Consider it a solemn warning from God. Scorn and you perish with scorners. Many already have.

As for those who criticize or condemn these exhibitionist scoundrels, don’t think that automatically means you are right with God. David Buckman, who sent us this video, was trying to condemn us as those who have been baptized in Christ’s Spirit and teach the true meaning of Pentecost, as if that holy event has anything to do with the vile antics of Fields and associates, which David scorns.

Buckman had his own delusional and self-righteous agenda that he wouldn’t relinquish when confronted with the truth, but fought against us as if his erroneous doctrine was his life, which it was. We finally told him: “We see very little difference between you and Roy Fields. While his madness and demonic possession is emotional and exhibitionistic, yours is educational and doctrinal. For you to send us a video of him, as if we support such wickedness, only proves your ignorance of what we have written you and consequent contempt for us. Go your way, evil man.”

So, as you can see, it’s not about whether you support such error or condemn it, but whether you believe and follow the Lord. To do that, you need to hear the truth. And now you have.