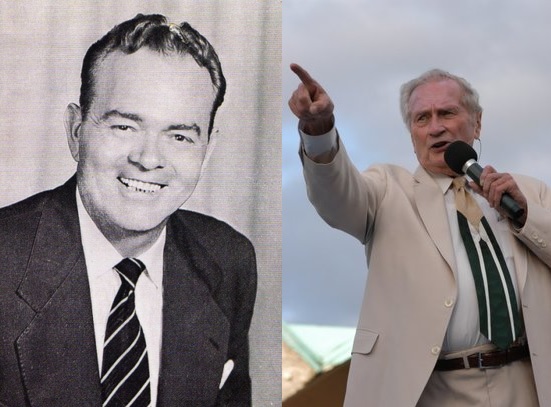 Much can be said about a spiritual teacher by knowing who his mentor is. A disciple of the Dalai Lama teaches his variety of Buddhism, and the disciple of a counterfeit Christian teaches his brand of counterfeit Christianity. Where do you expect that will take you? “A good tree cannot bring forth evil fruits, nor can a corrupt tree bring forth good fruit” (Matthew 7:18 MKJV).

In a letter naming several false teachers, Stephen said the following about one in particular:

RW Schambach is dead. he died on 17-01-2012 so just recently died… I just pray he repented of his prosperity garbage or he went to hell.

Thank you for your letter, Stephen.

There are so many scoundrels out there. Schambach was one who prided in “being there” with A.A. Allen, if I’m not mistaken. Is that good or bad? God knows. I do know that Allen didn’t die a godly death.

Schambach’s foundation, whose “mission is about extending the legacy of R.W. Schambach for soul-winning and missions which is ultimately an extension of Jesus’ legacy,” confirms his connection to A.A. Allen and uses it as a credential for their ministry:

“[Schambach] apprenticed alongside of A.A. Allen, a well-known miracle evangelist of the 1940’s and 50’s. The five years he served as Brother Allen’s associate evangelist was his ‘school of the Spirit,’ learning how to move in the gift of faith and the working of miracles.”

Allen died tragically at age 59, after a heavy drinking binge. His blood alcohol reading, the coroner said, was “enough to ensure a deep coma.” Allen’s close associate and helper tried to cover up what happened in order to protect “one of God’s chosen.”

Who needs to be told that these aren’t the fruits of faith or of God’s chosen, but are the fruits of an evil tree? Hear and believe:

“Watch the perfect and behold the upright one; for the end of that man is peace. But the sinners are destroyed together; the end of the wicked is cut off” (Psalms 37:37-38 MKJV).

There are several well-documented indications of impropriety and ungodliness surrounding the ministry of A.A. Allen. That Schambach and those following him would identify themselves with a proven charlatan, who died the death of a sinner, shows the pedigree of their works. They are Satan’s ministers, transforming themselves into angels of light, but exposed by the Light.

Please note: We don’t condemn sinners. We expose sinners posing as men of God, condemning their works of darkness in no uncertain terms.

For another incident of a tragic death of a presumed man of God, read about David Wilkerson. For an explanation and insight into the error of presumptuous “Word of Faith” and prosperity preaching, see Andrew Wommack.

As for Schambach going to hell, religious sinners are in hell presently, whether in this world or the next, because hell is the place of darkness and separation from God. How else could one drink himself to death? And how else could one cite a drunkard as his spiritual mentor, expecting you to follow him? Such great delusion can only take place in a total absence of Light.

But God has something better in store for all.

2 Thessalonians 2:3-12 LITV
(3) Do not let anyone deceive you in any way, because that Day will not come unless first comes the falling away, and the man of sin is revealed, the son of perdition,
(4) the one opposing and exalting himself over everything being called God, or object of worship, so as for him to sit in the temple of God as God, setting forth himself, that he is God.
(5) Do you not remember that I told you these things, I yet being with you?
(6) And now you know the thing holding back, for him to be revealed in his time.
(7) For the mystery of lawlessness already is working, only He is holding back now, until it comes out of the midst.
(8) And then the lawless one will be revealed, whom the Lord will consume by the spirit of His mouth, and will bring to nought by the brightness of His presence.
(9) His coming is according to the working of Satan in all power and miraculous signs and lying wonders,
(10) and in all deceit of unrighteousness in those being lost, because they did not receive the love of the truth in order for them to be saved.
(11) And because of this, God will send to them a working of error, for them to believe the lie,
(12) that all may be judged, those not believing the truth, but who have delighted in unrighteousness.

“That ALL may be judged.” It’s only when the heart is turned to the Lord in word and deed that hell loses its grip over men, being destroyed in the Lake of Fire. God will restore every soul in its time, just as every soul has been lost and ensnared by sin:

So beware of walking in bitterness and carnal judgment of false teachers (or anyone else), which will only come back on you:

“Judge not, that you may not be judged. For with whatever judgment you judge, you shall be judged; and with whatever measure you measure out, it shall be measured to you again” (Matthew 7:1-2 MKJV).

No doubt there are other falsehoods in Schambach’s teachings and ongoing ministry through his foundation. If you have any questions on this matter, consult God’s measuring line as defined by His Word: The True Marks of a Cult and Diabolical Doctrines. If you can’t find what you’re looking for there or elsewhere on our site, let us know.

One additional note: I quoted the director’s statement about the Schambach Foundation’s mission, saying it was to extend his legacy “for soul-winning and missions which is ultimately an extension of Jesus’ legacy.” That is not true. It’s just another example of ungodly mixture. It is the legacy of one coming in his own name and using the Lord’s Name to do so.

“I have come in My Father’s Name, and you do not receive Me. If another shall come in his own name, him you will receive” (John 5:43 MKJV).